Spain is perhaps the most naturally beautiful country in Europe. There are a total of 15 Spanish National Parks, each completely different to the next.

The countries unique weather patterns create equally unique ecosystems, and at the same time amazingly diverse. On the Iberian Peninsula alone you can find arid deserts and frozen glaciers. But Spain also has tropical islands, vast marshlands, and harsh mountainous landscapes as well.  The national park network offers the best opportunities to enjoy the flora and Spanish animals alike. Many local species are only found at some of the national parks, and big conservation efforts and programs are in place. Information on these programs is provided at each of the national parks in the information centers.

Spain was one of the first countries in Europe to establish a National Parks system. They took the idea from the United States. On August 25, 1916, President Woodrow Wilson signed the “Organic Act” creating the National Park Service, a federal bureau in the Department of the Interior responsible for maintaining national parks and monuments that were then managed by the department. Spain followed suit and created the Spain National Park service in the same year and declared mount Covadonga in the Picos de Europa Mountain Range, the first national park in the country.

Since then, Spain has declared 15 National Parks that are considered to be “the best examples of the natural heritage of Spain”. The last park to receive the category of National Park was the Guadarrama Mountain Range, located in the Autonomous Community of Madrid.

The government of Spain differentiates between National and Natural parks, the first being of a slightly higher category than the second. These categories are established to better preserve their natural value and focus scientific efforts of preservation and study. 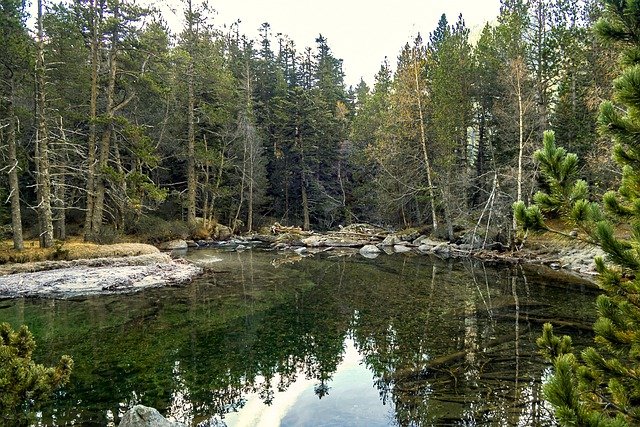 The National Park of Aigüestortes i Estany de Sant Maurici is located in the province of Lleida in the region of Catalonia. It is located between the districts of Alta Ribagorça, Pallars Sobirà, Val d’Aran y Pallars Jussà. This amazing park stands out because of the great number of lakes interconnected by rivers and valleys that create a striking landscape. You will find calm, crystal clear, lakes, sheer mountain faces and lush green vegetation. Simply gorgeous.

The surrounding waters are particularly pristine and fertile and the islands themselves are home to over 150 species of migratory birds, and to one of the Baleares most beautiful beaches. But, something you wont find anywhere else in the world are the endemic species unique to this “chain within a chain” of islands. There are over 200 species of birds, fish, flora and invertebrates that cannot be found in any other place. If all this weren’t enough, who can say no to a vacation on a Mediterranean Island? 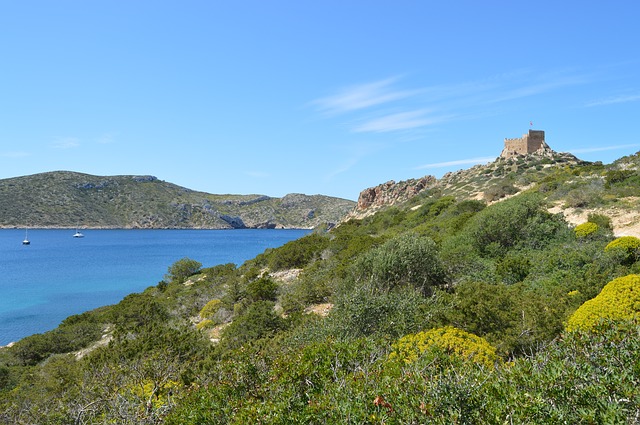 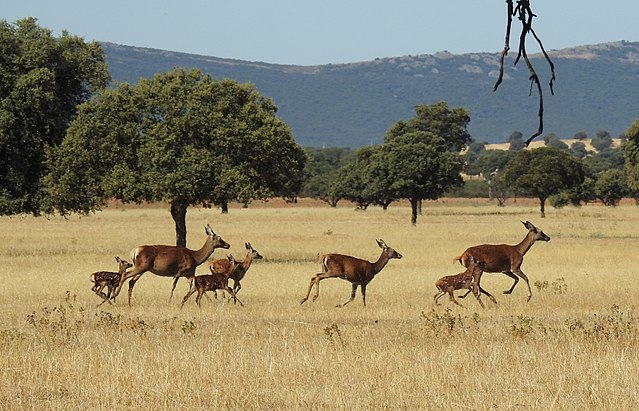 In the mountainous region south of the medieval city of Toledo, and between Ciudad Real, the Cabañeros National Park is an area dedicated to wildlife protection. The park is home to some of the most unique mammals on the Iberian peninsula. The elusive Iberian Lynx has even been sighted in the park after a 50 year absence.

The park almost became a shooting range for the military but, after an exemplary case of citizen intervention in 1987, the 16.000 hectares of pristine Manchego land were saved. The region became a national park officially in 1995 and the land that fell under this protection was expanded to 40.000 hectares.

The Taburiente caldera is one of the 4 national parks located in the Canary Island Archipelago. This park is located at the center of a natural fortress created by the mountains of the island of Palma. The protection of the surrounding mountains create a 4.690 hectare sanctuary that is home to a great number of endemic species that can only be found on this island.

The park sits at 2.000 meters of altitude and it is like something out a movie: a hidden oasis protected by sheer mountains. Spectacular. 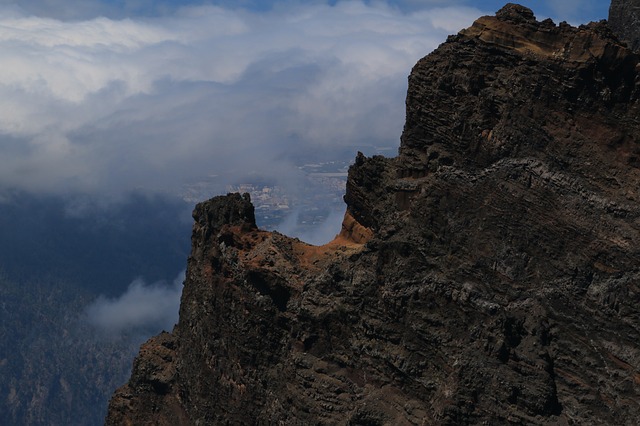 Doñana national park is perhaps the most famous of Spain’s National Parks. the is truly no other place like it on Earth. This area of Spain seems to have hit the “nature lottery”. Because of its location, it’s proximity to the ocean, the river that crosses through the park, the weather, etc. Doñana is home to 4 different ecosystems. The park features dunes, marshlands, mediterranean forest and grasslands.

This unique convergence of conditions make it the perfect home to an incredible number of species. In particular, migratory birds flock to doñana in droves making it a bird watching heaven. It is also home to a great number of endangered Spanish species like the Iberian Lynx and the Imperial Eagle. The park spans over 54.252 hectares between Huelva and Sevilla and became a national park in 1969.

Grajonay is another of the national parks of the Canary Islands, located on the island of Gomera. The landscape on Gomera is predominantly volcanic, but Garajonay is home to a lush, mossy, otherworldly forest which is described as “out of a fairy tale”. The park spans over 3.986 hectares and was declared a national park in 1981.

The protection of the sheer mountains and the ocean breeze create a unique climate that makes this small area of the island burst out with life and covers the land with an almost permanent blanket of fog. One of the last ancient subtropical forests still open to the public. 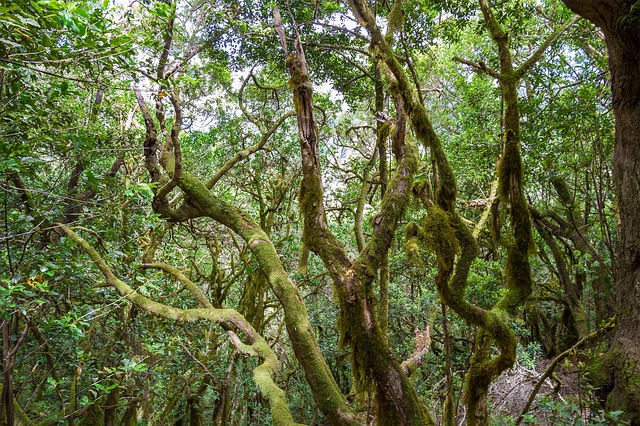 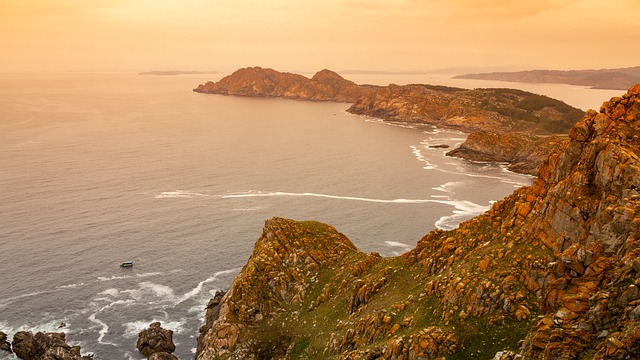 This chain of small islands are located off the coast of Galicia in northwestern Spain. The go from the Vigo estuary to Arousa. Within the park there are four distinct archipelagos  the islands of Cíes, Ons, Sálvora y Cortegada. The islands are gorgeous, with a unique ecosystem, but the true richness of the park is located underwater.

The biodiversity of sea dwelling creatures in this coastal area is almost overwhelming. In addition, many legends and rumors swirl around these islands, making the all the more interesting and mysterious. The park, created in 2002, spans over 7.200 maritime hectares and 1.194 hectares on land.

The National Park of Monfragüe is located in the beautiful city Cáceres in the southwest of the península. The Tajo river crosses through this region and makes this park special. The river and the climate make it an ideal home for birds. Monfragüe became a national park in 1979 and occupies 18.350 hectares.

The park has become a prime bird watching destination and is famous for the striking images of sheer rock and hoards of vultures circling. An ominous image, and an amazing slice of Spain. 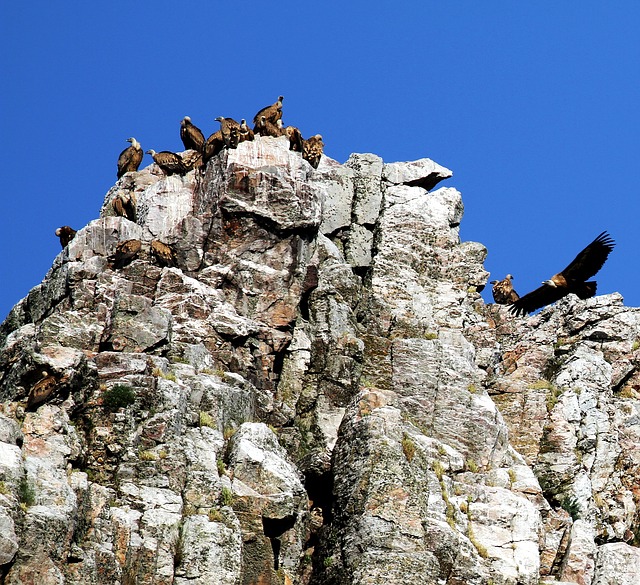 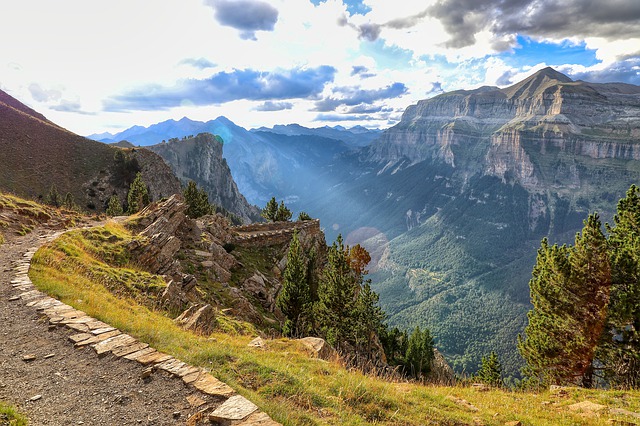 One of the most visited of Spain’s National Parks. This park is located in the northeastern region of Aragón, in the province of Huesca. The park is located in the Pyrenees and attracts over half a million visitors every year. It ‘s that beautiful. It is the oldest protected natural space in Spain. It became a national park all the way back in 1918. The park is also a Biosdera reserve and a UNESCO world heritage site.

The Picos of Europa National park is located in Northern Spain and spills over into three different regions: Cantabria, Asturias and León. The Picos de Europa are an abrupt and imposing group of mountains, that at their closest, are just 15 km from the ocean. Within this natural fortress there are forests, lakes and hidden villages with centuries old traditions.

This legendary area of Spain became a national park in 1918 and spans over 67.000 hectares. 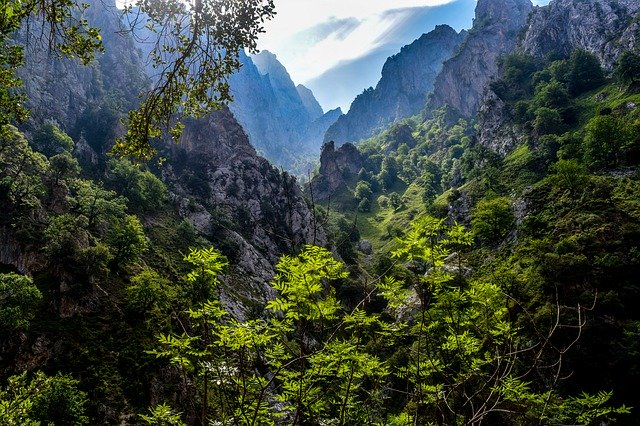 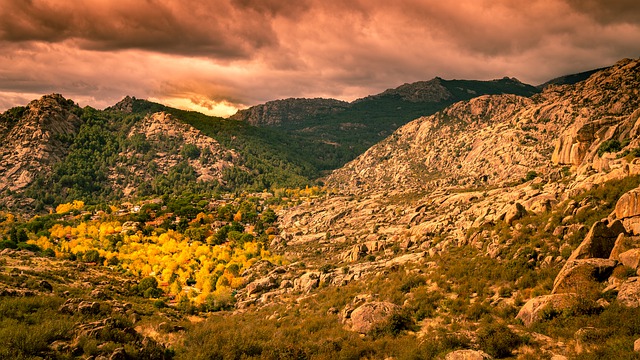 The Guadarrama mountain range is located in Madrid and is the youngest National Park. The range spans the western border of the autonomous Community of Madrid, separating it from Castilla León, and spilling over into the medieval city of Segovia.

The park harbours spectacular wildlife, ancient commercial routes and ancestral forests. The park covers over 33 thousand hectares and it is a perfect day trip if you are staying in Madrid.

Sierra Nevada overlooks the spectacular city of Granada and the mythic Alhambra. It is the tallest point in the Iberian Peninsula and is one of the only places where you will find perpetual snows and glaciers. The park is also home to over 2.000 plant species, 66 of which are only found on the mountain. There are also endemic species of mammals and insects to be discovered. The park occupies 86.208 hectares. 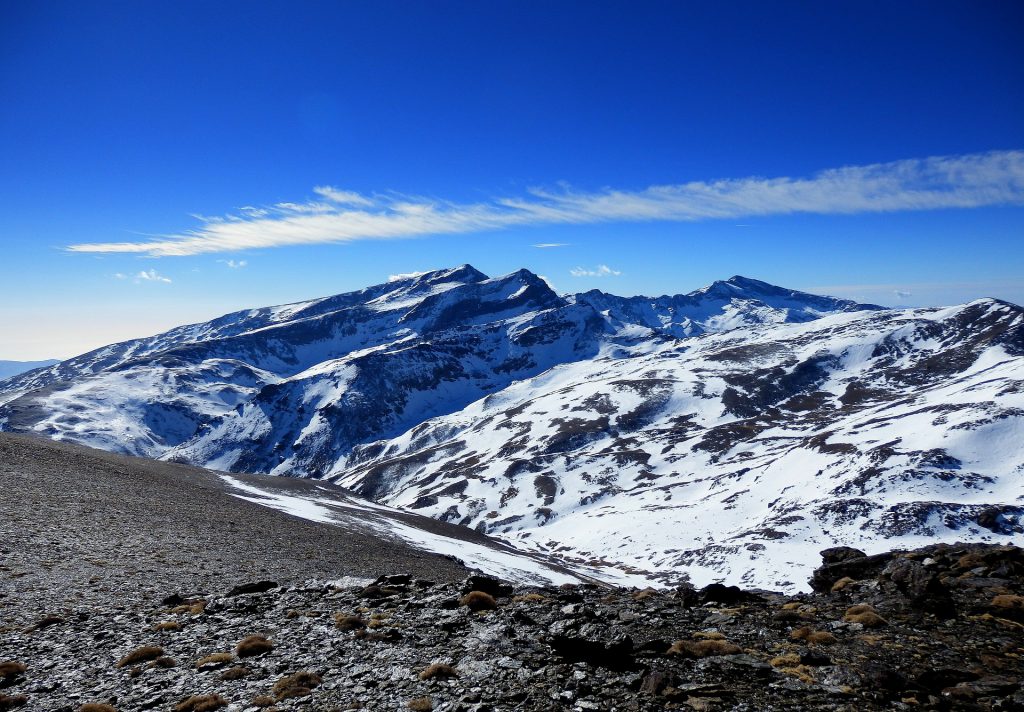 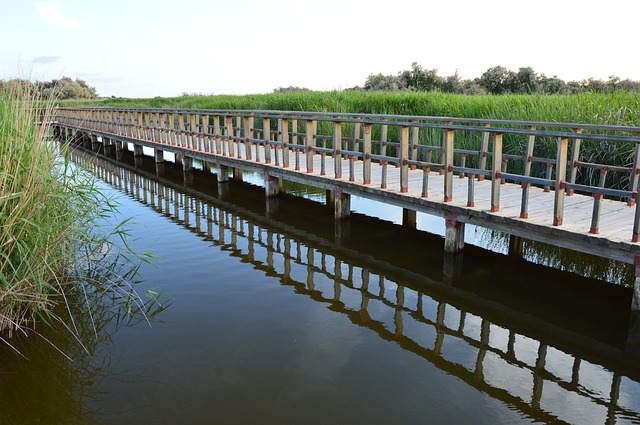 Las Tablas de Daimiel is a unique wetland in the heart of Spain, just south of Madrid in the Province of Ciudad Real. The convergence of the Guadiana and Cigüela rivers at this point create a vast marshland unlike any other. The park boasts an amazing variety of  of wild life and plant species.

Tablas de Daimiel became a national park in 1973 and spans over 1.928 hectares of land.

The Teide National Park is located on the island of Tenerife, part of the Canary Islands. Mount Teide is the tallest point in Spain (not the peninsula of course). It is odd to see perpetual snow on a tropical island, but that is exactly what you will find at the top of the mountain.

The landscape is volcanic and scarred by the lava spewed out by the volcano centuries ago. As unforgiving as that sounds the area surrounding the mountain is teaming with vegetation and life and is home to a great number of species unique to the island. 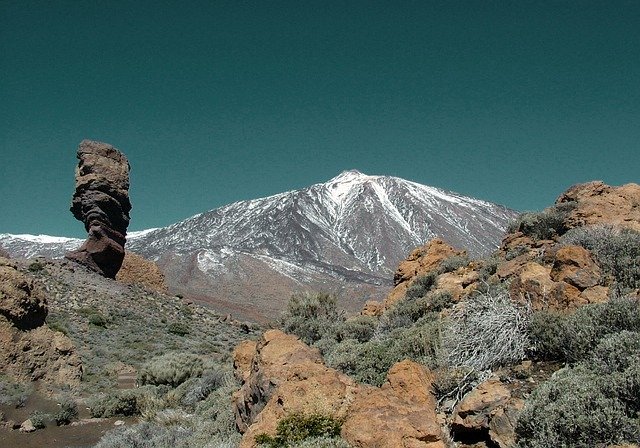 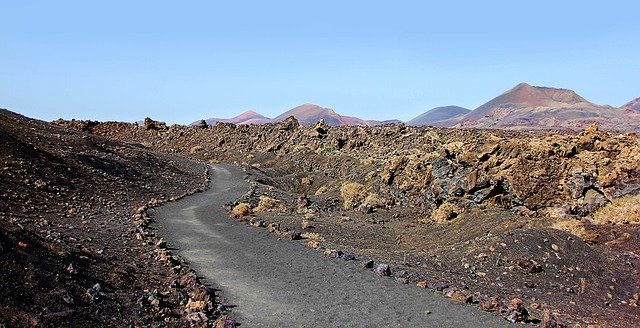 The wildlife that can be found has adapted to this harsh environment. At the center of the park you can visit the active volcano and even enjoy a meal cooked only with the heat that seeps out from the crater. 5.107 hectares of otherworldly beauty. 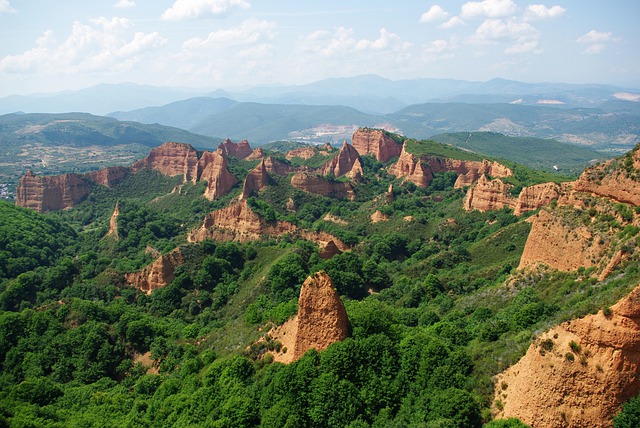 Las Médulas Las Médulas, located in the province of León (near the city of León as well), in northern Spain is a unique landscape, carved 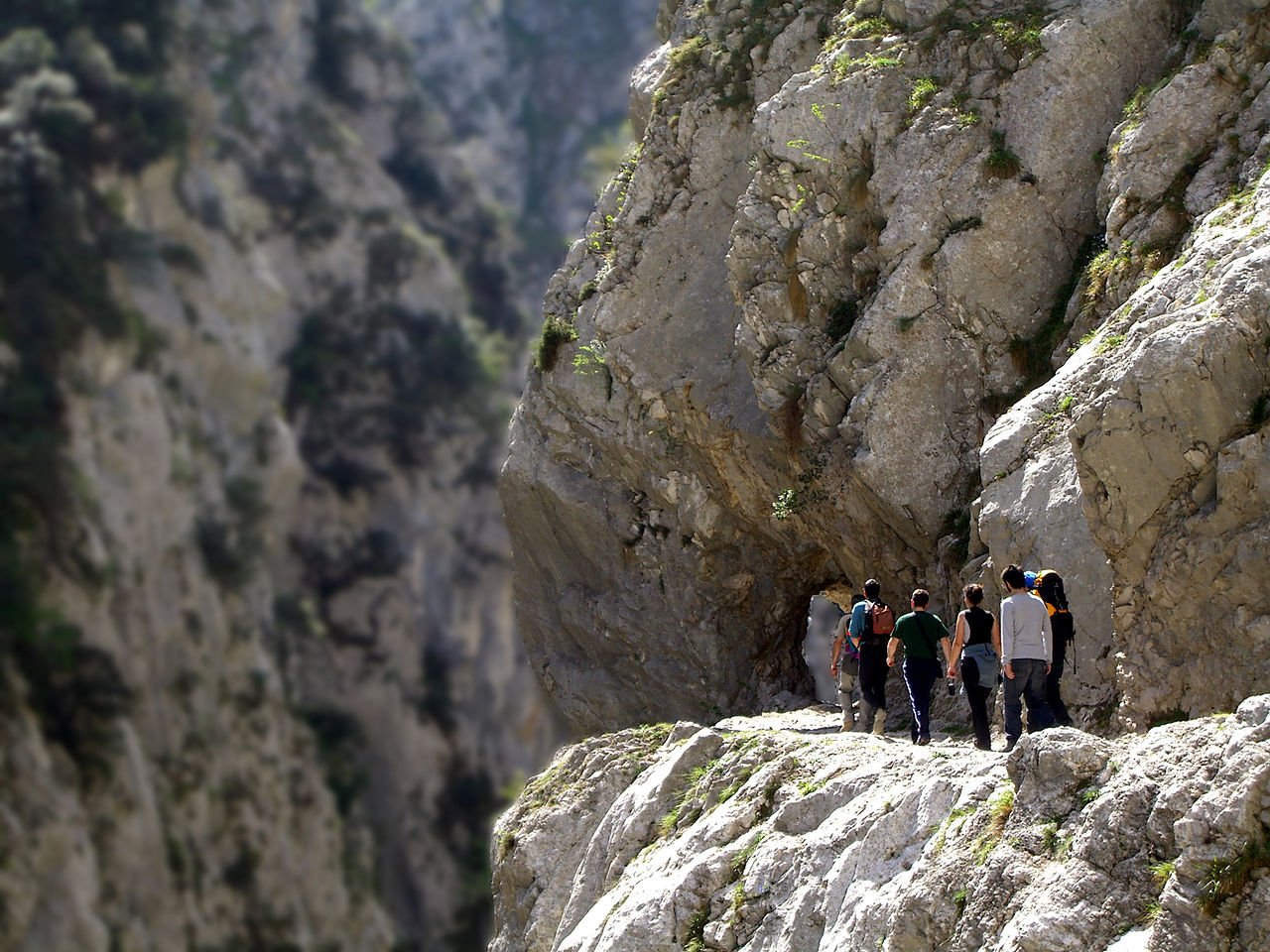 Hiking in Spain: The top 14 amazing routes you can enjoy

Many hikes like El Caminito del Rey or Las Vías Verdes have become very popular in recent years and the most popular choice of adventure travel in Spain as well. There are however many more interesting and enjoyable hikes in Spain awaiting you