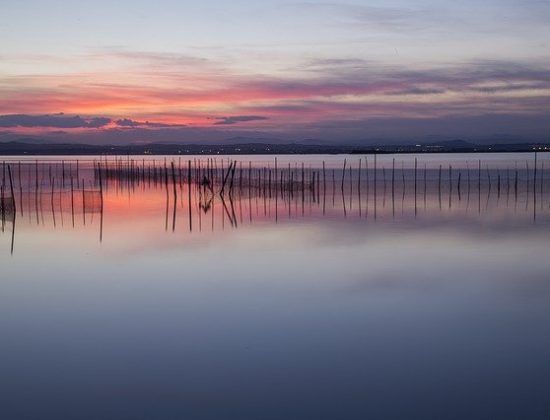 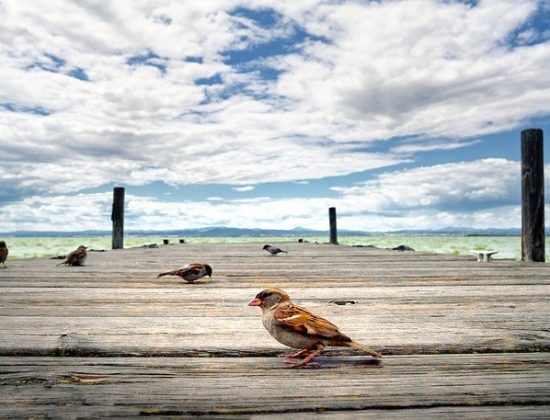 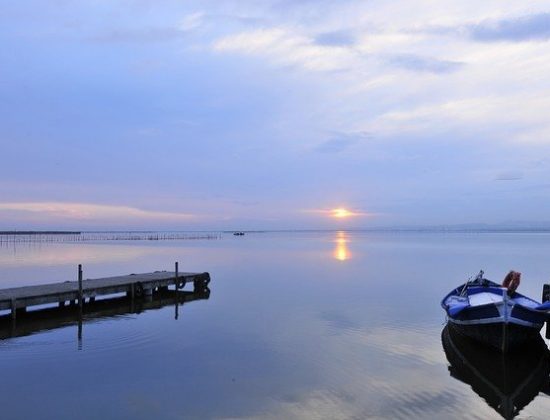 The Albufera, La Albufera or L’Albufera de València as it’s known, the amazing nature park, located just south (11km) of the center of  the city of Valencia. La Albufera is a vast freshwater lagoon and estuary

The nature reserve spans over 21,120 hectares (52,200 acres). Unique climate conditions are responsible for the incredible biodiversity that the reserve enjoys. It is a prime destination for a great number of migratory birds and is also home to a number of endangered species like the farfet and the samaruc.

The Albufera was originally a saltwater lagoon, but over time, thanks to naturally occurring irrigation and canals draining into the estuary and the sand bars increasing in size had converted it to freshwater by the seventeenth century. The area was declared a nature park by the government f Spain in 1986 and in 1990 it became a protected ecosystem. The water of the Albufera has an average depth of just 1 meter or 3,2 feet and is separated from the Mediterranean sea by a thin bank of sand held in place by a Mediterranean pine tree forest known as the Dehesa de Saler.

The coast of Valencia used to be filled with similar marshlands, but the Albufera is now the largest and best-preserved that remains. Other smaller marshes that can be found on the Valencian coast are the Pegp-Olivia Marsh, the Jaraco Marsh, the Rafalell y Vistabella marsh, the El Moro Marsh and the Almenara among others.

The Albufera was formed during the Pleistocene. There was once a bay where the marsh now sits that got sealed off by natural occurrence, trapping seawater and creating the lagoon. During the Roman empire, the lagoon was definitely sealed off as the Romans began to use the area for crop growth.

The lagoon was much larger in the past as well. It once spanned over 30.000 hectares. As people began to settle in the area and began harvesting and farming, they created new farmland, eating away at the lagoon. The lagoon currently spans just 2800 hectares.

During the Moorish occupation of the Iberian Peninsula, the Albufera was gifted to the emir of Zaragoza thanks to a settlement with El Cid, one of Spain’s greatest heroes, after he had reconquered the city of Valencia.

In 1250 fishing was legalized in the Albufera when a village of fishermen from Ruzafa settled the island of El Palmar, from here the could more easily perform their trade. This began a trend across the Valencian coast and since then fishing in the area has always been a closely regulated activity.

During the XIX century, Spain was invaded by the French. When the reached Valencia, the French were so impressed by the natural beauty of the Albufera that it became a coveted piece of land among the invading generals. At the end of the war, La Albufera was gifted by Joseph Bonaparte to Marshal Suchet as well as the title of Duke of the Albufera. La Albufera would remain in his possession until 1818 when King Ferdinand the VII reclaimed the Spanish throne.

During the second third of the XIX century is when the Albufera began to shrink drastically as farmers began burying the lagoon. As the did so the fauna began to disappear, so much so that all the big game that once roamed the marshlands vanished to this day.

In 1962 a long legal battle broke out as developers began plans to began building houses, hotels, and other recreational real estates on the land surrounding the lagoon. Conservationists, in particular Félix Rodríguez de la Fuente, Spain’s greatest wildlife advocate, began protesting the plans to build on La Albufera. In 1973 it was decided to halt all construction and most of the damage was avoided.

How far from Valencia is La Albufera?

La Albufera is just 11 km south of the city of Valencia (as the cow flies) and is easily accessible by car.

How was the Albufera formed?

The Albufera was once a bay and during the Pleistocene. As the centuries went on, different natural processes (storms, erosion, etc,) began to seal off a portion of the Mediterranean Sea, transforming it into a giant inland lagoon. During the roman empire the Romans finished off the work that nature began and permanently sealed off the lagoon as the settled the area.

How many bird species are found in La Albufera?

La Albufera is one of the best places in Spain for Bird watching. There have been over 350 different species of birds registered in the Albufera natural park. This is counting both resident species and migratory species that pass through La Albufera during their migration. La Albufera offers a perfect habitat to many migratory birds making it an excellent resting area for them. There are three main classifications for the birds that aither live or pass through the park:

The nesting water bird community is represented by populations of loons —Podicipedidae, with two species—, herons —Ardeidae, with seven species—, ducks —Anatiidae, five species—, coots —Rallidae, four species—, waders —Recurvirostridae, Glareolidae and Charadriidae, with five species—, gulls —Lariidae, with five species— and terns —Sternidae, with five species—. The populations of terns and herons stand out, with figures that sometimes exceed four thousand couples each. The marsh vegetation areas are home to an interesting population of marsh passerines, among which the Royal Warbler Acrocephalus melanopogon, the single-billed Locustella luscionioides or the mustached Panurus biarmicus stand out. It is also worth noting the presence of scarce nesting species such as the brown teal Marmaronetta angustirostris (between one and four pairs, depending on years) or the common gallinule Porphyrio porphyrio (slightly more than one hundred pairs).

In winter, L’Albufera also hosts an important community of waterfowl, among which the ducks stand out, with figures that sometimes exceed 25,000 individuals; seagulls, with more than 20,000 birds, and waders, with more than two thousand birds. The numbers of the herons group – more than two thousand birds – and the large cormorant Phalacrocorax carbo, which far exceeds three thousand birds, are also high. In this period, there are also large numbers of the Netta Rufina red duck, sometimes over five thousand individuals, and, more recently, of the blue mallard duck Anas platyrhynchos, in quantities greater than ten thousand birds.

In the different migratory periods, there are also high numbers of some groups of birds, especially waders, which find in the marsh an ideal habitat for obtaining food. Between February-March and July-September, high numbers of black-winged limosa limosa  can be found—more than two thousand birds in March—, European lapwing Vanellus vanellus and European golden plover Pluvialis apricaria —more than five hundred specimens, and of sandpipers and archbebes – more than four hundred birds. It is also common to find the common pratincole Glareola pratincola in remarkable concentrations, with totals exceeding three hundred individuals.A good number of species of seabirds are also observed on the coast, mainly seagulls and terns. Also, the presence of the Balearic Shearwater Puffinus mauretanicus in specific periods of the year can reach two or three thousand individuals. 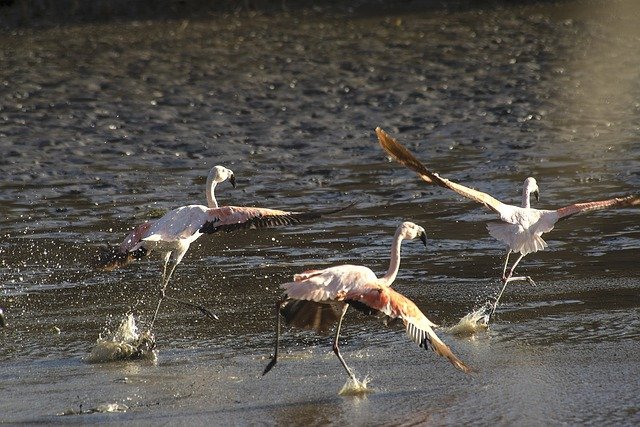 What is there to do in La Albufera?

La Albufera is one of Spains most spectacular nature parks, and one of the best hiking routes you can enjoy in the Iberian peninsula. There are also boat rides that can be hired if you want to explore the lagoon and the surrounding marsh. The area of El Saler is particularly perfect if you are looking to take a long stroll through nature.

Bird watching is also a popular pastime in the Albufera due to the large number of birds it hosts.

But one of the Alabufera’s main attractions is the food. There are many excellent typical Valencian restaurants in the area that specialize in seafood and, of course, Paella. La Albufera is said to be the birth place of the Paella. It is easy to see how that could have happened, being surrounded by kilometres of rice paddies and waters rich in seafood. Another typical dish from the area is known as “All I pebre”, stewed eel with garlic, potatoes and pepper. For the best food, head over to El Palmar.

What are the best restaurants in La Albufera?

Check out our article on the best paella restaurants  in Valencia, which includes many in La Albufera and discover the best of the best the area has to offer.

Valencia´s Mediterranean climate makes it a great destination to be enjoyed throughout the year. There are few places in the world that are so connected to a dish as Valencia. Paella is almost a synonym for Valencia. Visitors flock to ensure they try the best paella in Valencia.
Our local team has put together a list with excellent options in different areas of Valencia, and for different budgets. including the amazing natural park of La Albufera. Locals refer to paella as rice and it comes in many different versions: seafood, vegetables, black rice…. No matter which one you try, this will for sure be a superb experience if you opt for one of the restaurants in this list.