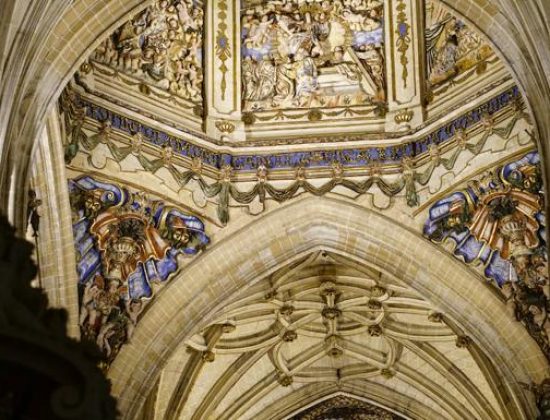 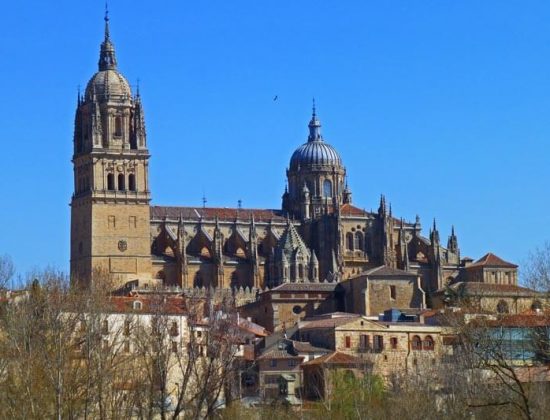 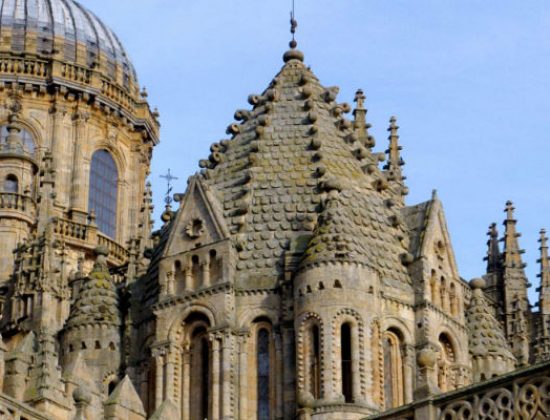 The 2 cathedrals in Salamanca- visitor´s guide

We recommend enjoying views of the cathedral from the other side of the river Tormes. Admission tickets are free on Tuesdays but only for certain hours. On any day the ticket will be valid to visit both cathedrals but the visit to the tower is not included (access from a different door and with a separate ticket) The views from the tower are impressive!

How large are the cathedrals in Salamanca

History of the cathedrals in Salamanca

When the new cathedral was built, the old one was left standing so people could continue to go to mass (so the new one was not built on top of the old cathedral).

Why did the build a new cathedral in Salamanca?

The main reason why the city decided to build a new cathedral was the size of the old one had become too small. Salamanca was growing, mainly thanks to the activity generated by the University,  and an increasing amount of people wanted to go to mass.

How were both cathedrals put together? The northern transept of the old cathedral was replaced by a chapel of the new cathedral. This chapel includes a passage through to the Old Cathedral. The original Western portal was walled up from the inside, but a 13C French Gothic Annunciation was retained.

The old Cathedral is one of the finest exxamples of Romanesque art in Spain. The size of the old cathedral is very small when compared to “La Nueva”, which can be seen from virtually any place in Salamanca (mainly the dome and the bells)

The old cathedral in Salamanca

The Old Cathedral of Salamanca was built in the 12th Century on the site of another church; six architects were employed on it before its completion during the first quarter of the 13 Century. and the names of some of them, such as Maestro Pedro and Petrus Petriz, who built the fine dome over the crossing in the celebrated Torre de Gallo (1163-4), are known.

The tower has splendid Romanesque windows, arches, ornamentation, four turrets and a Byzantine-style dome supported on a large drum with columns and windows. The best view of the lovely exterior is from the Patio Chico. The old cathedral was begun in
Romanesque style but as the work progressed it embraced elements of French-Gothic and Byzantine styles.

It has a nave, two aisles, three semicircular apses, cross vaulting and the dome over the crossing described above, all designed and constructed with elegance and harmony, in comparison to the New Cathedral which is decorated with fewer, but more splendid pieces.

The vault of the choir is frescoed with scenes from the Last Judgement by Nicolás Florentino, who was also responsible for the extraordinary 15C Gothic retable with its 53 panels, all framed by arches and depicting scenes from the lives of Jesus and the Virgin, each more beautiful than the last. At the bottom-middle of the retable, there is one of Spain’s finest works of art, a statue of the the Virgen de la Vega, patron saint of Salamanca.

Turning back to the crossing and passing through the right transept, there is a decorated 13 Century Romanesque door which leads through to the cloisters of 1162-78. They have been restored on numerous occasions but still have original Romanesque capitals and tombs.
The following chapels are also of great interest. The Capilla de Talavera dates from around 1180 and contains original Gothic-Mudéjar stellar vaulting and, I a rather unusual 16C grille. The Gothic Capilla de Santa Barbara (1344) has interesting vaults. The Capilla de Anaya (a notable family in Salamanca) has a fine organ gallery.

Plan of the old and new cathedrals in Salamanca

The old cathedral is the one inside the red line 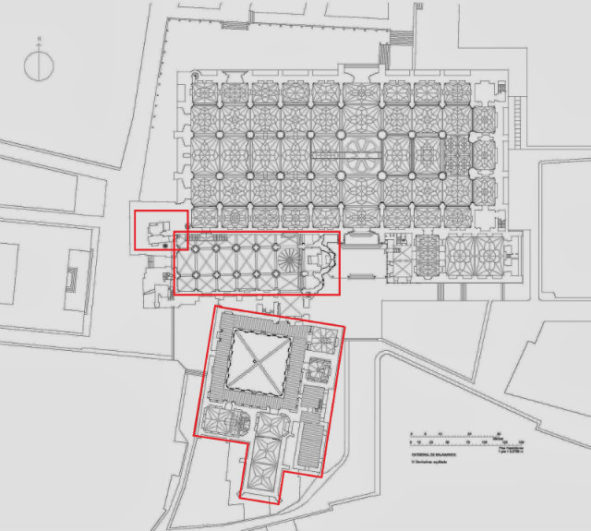 Along with the cathedral of Segovia, the cathedral of Salamanca is considered one of the last gothic examples in Europe. The main façade shows a clear transition to Renaissance style and has a wealth of detail, with carved images that depict multiple scenes from the Bible. Don’t be surprised if you find people standing in front of it looking at it for minutes!

The dome is probably the most impressive highlight of the new cathedral. Visible from many parts of Salamanca (our favorite views are from the other side of the Tormes river). The dome is highly decorated and it has eight large windows that provide with a very special lighting.

The tower is the second most impressive part of the New cathedral. Any visitor will notice that it leans (but safely!) the tower, build at the beginning of the 18th century sufferend from an earthquake (the famous earthquake that destroyed Lisbon). The tower was impacted but instead of demolishing it, the decision was taken to reinforce it.

Burgos Cathedral is located in the city of Burgos, in the region of Castilla Leon. The building that we see today stands on site of

La Giralda and cathedral – Compelete visitors guide History and styles A lot has been said and written about the Sevilla Cathedral, Santa Maria de

Great Mosque of Cordoba . A complete guide The Great Cordoba Mosque is a grandiose and fascinating part of the Muslim art, initiated by the

The goal of the streams of pilgrims that arrive in Santiago de Compostela is the Plaza de España, or Plaza del Obradoiro – which means