The top 10 sights in Salamanca

Discover the best tourist attractions in Salamanca and how to organise your time to get the most out of all the things Salamanca offers.

Salamanca is located at a bit more than two hour´s drive from Madrid and it holds some of Spain´s top monuments!. It is a must-see destination in Spain so in case you plan a trip in central Spain.

You can prepare your trip with our Salamanca tourist guide and also our interactive tourist map of Salamanca. 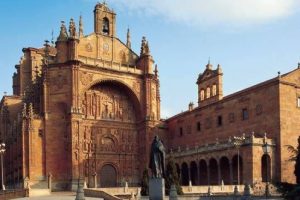 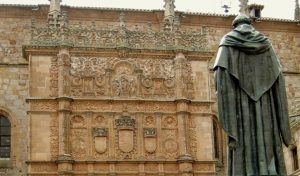 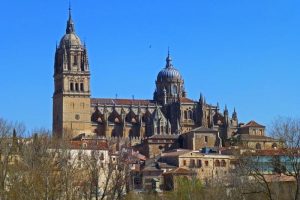 Convento de San Esteban. Church and museum A few minutes walk from the cathedrals of Salamanca, this elegant convent and church welcomes any visitor with its impressive façade. The convent is not amongst the top 5 sights in Salamanca, but it is with no doubt a master-piece example of churriguesco style. A Dominican monastery built by Juan de Ribero 1590. It has arcades at ground level, wide windows and medallions on the first floor and

University of Salamanca- A visitor´s guide Salamanca has been a university town for over 700 years, ever since King Alfonso IX gave the charter for the institution in  1218 and Ferdinand III confirmed the privilege in 1243. The university was originally housed in the old cathedral. It flourished in the 16 Century, when it was known as one of the oldest and most distinguished of universities in the world. It has lost much of its

The 2 cathedrals in Salamanca- visitor´s guide Any visitor to Salamanca will be surprised to learn that Salamanca enjoys two Cathedrals that stand side by side. In this Salamaca´s Cathedral guide we will cover the most interesting things to enjoy during a visit to the Cathedral. Since the visit covers both cathedrals and they literally stand next to each other, we will cover in this guide both cathedrals at the same time. Table of Contents

The massive Roman bridge over the Río Tormes offers one of the best views of Salamanca and a fantastic romantic walk. It is a 1,300 feet long bridge and it rests on 26 arches, of which 15 are original. It is known to have been
rebuilt as early as the 2C. 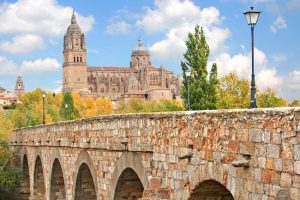 One of the most visited attractions in Salamanca,Dr.Talavera Maldonado, a Knight of  the Santiago order and counsellor to Queen Isabella, had this fantastic building built in 1514. The façade is decorated with shells, coats-of-arms and beautiful windows; the courtyard has a fine two-storeyed arcade and a staircase with decorated columns, lions and a coffered ceiling. the building houses today a public library. 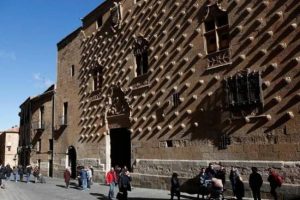 This mansion of renaissance style, which belonged to Queen Isabella’s physician, Dr.Ferná Alvarez Abarca, was built at the end of the 15th century and has a fine façade by Francisco de Colonia and a splendid wood-paneled ceiling in one room. It now houses the Provincial Museum of Fine Art, which has some prehistoric and Roman finds as well as a collection of paintings which includes works by Morales, González Arenal, Zuloaga, Zubiaurre 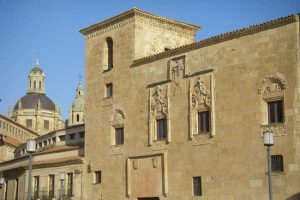 Opposite the Monterrey Palace on the Plaza de Agustinas. It was founded by the Counts of Monterrey in the 17C and contains some interesting paintings and items in gold. Its church, La Purisma, was built in 1636 in Italianate style by Gómez de Mora, Baltasar López and Antonio de Carassa. It contains a Crucifixion by Francisco Barsano

and depictions of St. Januarius, St. Augustine and the Adoration of the

Shepherds by José de Ribera. The huge painting above the high altar is also by

Ribera; it dates from 1635 and depicts the Immaculate Conception, or Purísma, and

has been called ‘the century’s finest Virgin’. The marble statues of the Counts of

Monterrey in prayer is also interesting. They are by the Italian sculptors Algardi

and Finelli, who also fashioned the marble-faced pulpit. 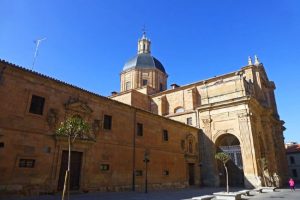 A bishop’s College, formerly Colegio Mayor de Santiago or the Los Irlandeses. The college dates from 1578 when it was commissioned by the Archbishop of Toledo, Alonso de Fonseca It was designed by the architects Diego de Siloé, Juan de Alava and Pedro de Ibarra. The church portal was designed by Alonso de Covarrubias and the altar, which dates from 1529, by Alonso Berruguete. 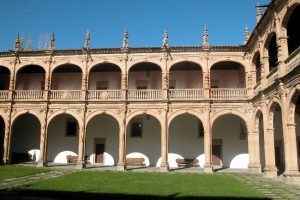 This is a very romantic and hidden spot that offers views over the river but also the cathedral. The garden is depicted in la Celestina, one of Spain´s most famous books. The story says this garden had inspired author Francisco de Rojas to write this romantic novel. The garden is next to the old city walls. There is a beautiful fountain and a sculpture of La Celestina (the matchmaker) 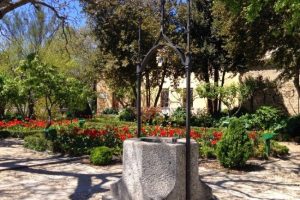 Located just in front of the Casa de las Conchas and a few minute’s walk from la Plaza Mayor, the building of the Jesuit college was commissioned in 1617 by Philip III and his wife Margaret of Austria to the plans of Juan Gómez de Mora. It was eventually completed in 1779 with the college portal.
Various architects were involved in the design of the church, college and ‘residencia
de la Comunidad’. The church is single aisled and is mostly the work of Gómez de
Mora; the façade dates from 1657 and the large, gilded altar is 17-18C. The sacristy
contains a retable by Andréz García de Quiñones, and there is a Flagellation of
Christ by Luis Salvator Carmona. The college has a well-balanced façade and a ba-
roque courtyard by García de Quiñones which must rank among the finest of its
kind in Spain. He was also responsible for designing the staircases, which were built
1730-40. 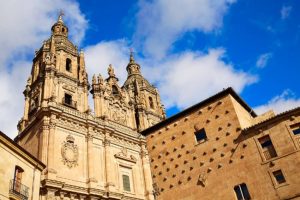