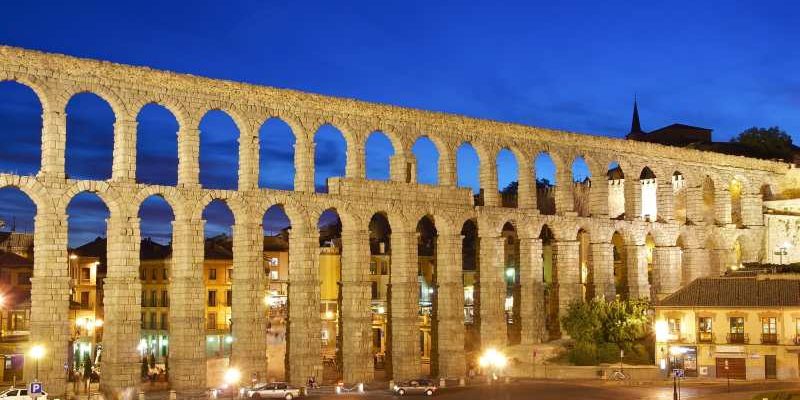 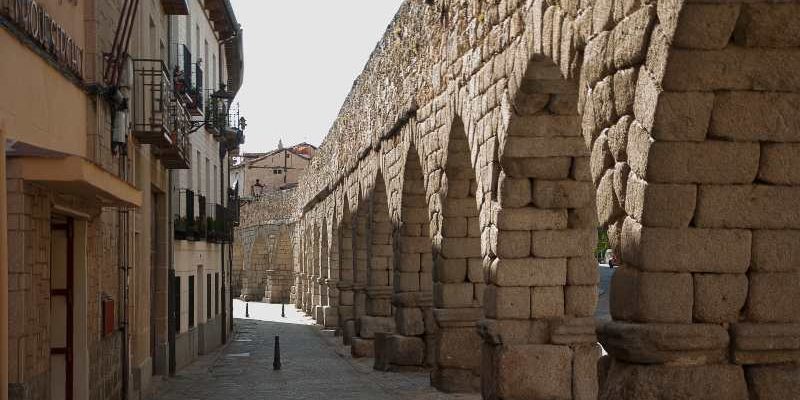 The aqueduct, the city's landmark, is one of the finest struc- tures from Roman times.

Why do we recommend Roman aqueduct?

The aqueduct is Segovia´s landmark. It is with no doubt one of the finest structures in the wolrd from Roman times. Its exact date of construction is not known, though experts date it between the second half of the first century and start of the second century A.D, during the reigns of Trajan and Vespian.
The highest part of the aqueduct is located next to a roundabout. A very convenient underground parking is located at this roundabout.
How long is the aqueduct of Segovia? The entire construction is 17 kilometers long. It brings water to Segovia from Riofrio (the mountains not far from Segovia). Water is collected in a water tower, which receives the name of “El Caseron” (The big house) and it is then conducted through a stone canal that ends at a second tower where the water is cleaned.
Is the aqueduct of Segovia still operational? The aqueduct stopped being use in the second half of the XX century. It is not used today.
From the second tower we just mentioned the aqueduct crosses Segovia. It is at this moment when it shines. 119 arches and 2,446 feet long. The aqueduct is two-storeyed over a length of 927 feet and at its highest it gets to 97 feet high (Plaza del azoguejo).
What sort of stone is used for its construction? Granite blocks from the Guadarrama mountain range were used for its construction and they were laid one on top of the other without any kind of mortar!
Many arches were destroyed during the conquest of Segovia by the Arabs in the 11th century, and were rebuilt in the 15th century.