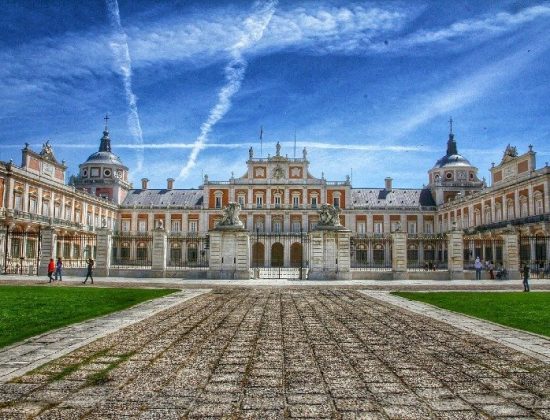 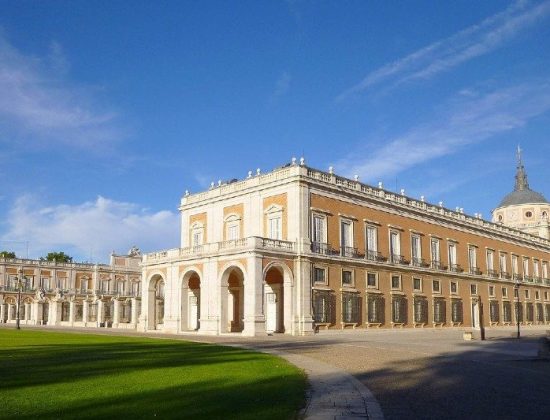 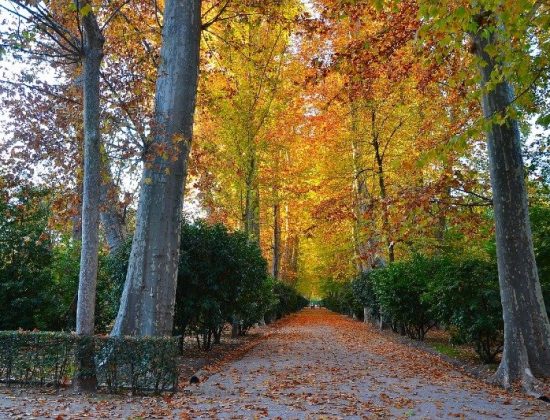 The Royal Palace of Aranjuez and gardens

In 1560 Philip II commissioned the architect Juan Bautista de Toledo to build an extension to the hunting lodge built by Charles V. After his death the work was continued by Juan de Herrera (El Escorial) .

Between 1660-65 the castle was destroyed by fire; Philip V had it rebuilt in 1722. Under Ferdinand VI and Charles III the building was further enlarged by the architect Sabatini (Royal palace ) . The throyal palaceree-storey main façade has corner pavilions with domes, and the two-storey wings end with arcades. The main building has statues of Philip II, Philip V and Ferdinand VI. Inside, the impressive staircase is by Bonavía. In the Saleta one can admire paintings by the Italian Juan Jordani and in the Antecámara and Cámara, paintings by LucasTor th. In the antechapel there are paintings by Mengs and Maella.

Day tour to Aranjuez from Madrid

This tour is a good option to enjoy Aranjuez and its gardens from Madrid. If you prefer to get on your own you will have to either drive or take the train (Cercanías from Atocha, which is  very convinient) . Please bear in mind that visits to the Royal palace can be booked at the palace but they are only in Spanish language

Designed by Sabatini and contains a superb carved marble altar and the well-known painting The Immaculate Conception by Maella. The fresco, The Virgin and the Evangelists, is by Baeyeu. The throne room’s ceiling is by Camarón and that of the Queen’s salon, in Pompeian style, is by Maella. Paintings are by Teniers. The pièce de résistance of the palace is the Sala de China (the porcelain room) in the SE tower, which has a large collection of porcelain and, on the walls, priceless Chinese paintings and engravings.

The Queen’s bedroom and dressing-room

This is one of the highlights in the palace and both evocate the way of life of the Royal family. Both bedroom and dressing-room are in Italian style with ceiling frescos by Z.G. Velázquez and Camarón. The Arab closet is a copy of the salon of the “Two Sisters’ in the Palace of the Alhambra in Granada.

Located at the end of the Calle de la Reina) it was commissioned by Charles IV and built by Isidro Gonzales Velázquez (finished in 1803), emulating the Trianon at Versailles. The Style Is classical with three storeys on a rectangular plan. The façade forms a  courtyard, with statues in niches and a beautiful fountain.

The main staircase has an unusual ramp in gilded bronze. Everywhere there are marble statues and frescos by the best contemporary artists:

The rooms are in the style of Louis XVI and Empire style; the Grand Salon is in Etruscan style. The María Luisa Room and the Platinum Room, richly decorated and containing many things of historical interest, are particularly magnificent.

A park surrounded by a high wall, on an island in the Tagus. It was blanned by Isabella the Catholic and Phim II and laid out in the 17C by Sebastián Herrera. It is remarkable for a great abundance of fountains and statues. At the entrance there is the beautiful marble fountain Hercules and Narcissus. The Salón de trees, extends along the left bank of the river; a the end of the avenue are the fountains of Bacchus and Neptune. Within a planting of lime trees is the fountain of Apollo, and further on the original clock fountain.

The Fuente de la Espina, rounded by Corinthian columns, and further fountains, named after Neptune and Cybele, are partly of marble.

This stretches before the East. front of the Royal Palace and is one of the most beautiful parks in Spain. Begun under Philip V in 1726, fountains, ponds and borders are laid out in French style. Its extension between the old chapel and the Royal Palace forms the Jardin de Estatuas with many busts of Roman emperors. Jardin del Principe: This garden stretches between the Royal Palace and the Tagus. Dating from the end of the 18C, the park is partly in French style and partly in English, or exotic, style, and made into a most interesting garden by Boutelou.

There are splendid fountains (including the fountain of Apollo with a columned hall), various pavilions and the ‘Casita del Labrador’

San Antonio: built under Ferdinand VI architect Bonavía. Only the atrium, consisting of arches with Ionic columns and a gallery, over which there is a dome, remains.

In the middle of the dome there is the royal coat-of-arms. Parish church de Alpagés: Building began under Carlos III and finished in 1749. It is a simple brick building with a baroque portal and wide-stretched dome.

Monastery of San Pascual: Founded by Charles III and built by the architect Sabatini (finished in 1773). On the wall near the high altar there is a painting of St.Paschal by Mengs. Paintings by Tiepolo and Maella can be seen above the other altars.

Also worth seeing near the Palace of Aranjuez

The Puente Largo (Long Bridge) is a beautiful construction which was finished under Charles III in 1761. The bridge spanning the Tagus is nearly 1,000 ft. long. The palaces of de Godoy,

Medinaceli and Osuna as well as the Casa de Infantes, all date from the 18C. Also of great interest is the Casa de Marinos with several of the Spanish kings’ richly carved ships.