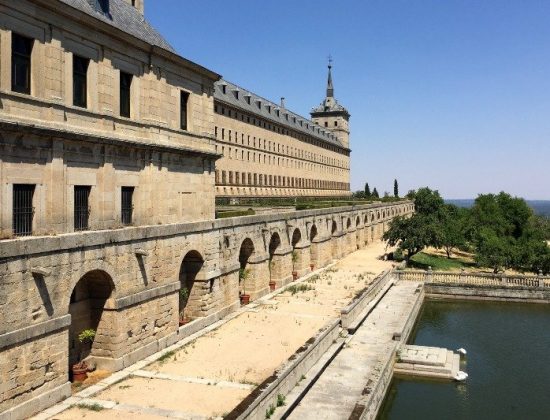 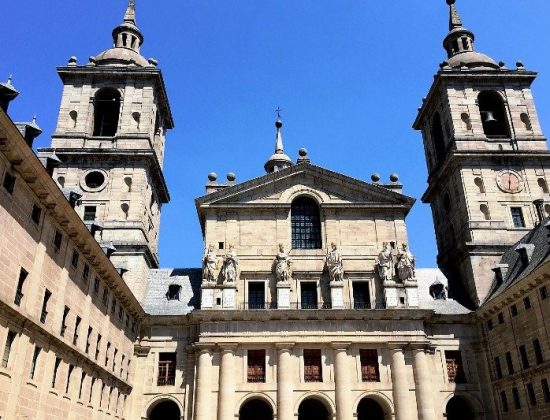 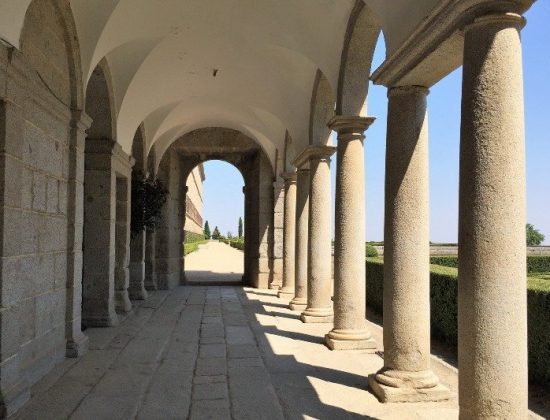 An imposing Monastery. 2,000 windows, 86 staircases, 13 chapels... One of the most impressive buildings in the world

The two bell towers and the high dome are a distinctive feature of the complex. Altogether it comprises 16 courtyards, 12 cloisters, 86 staircases, over 2,000 windows, 88 fountains, and 13 chapels and oratories!!!

Where is El Escorial located?

Tours to El Escorial from Madrid

How to get to El Escorial from Madrid?

It is very easy to drive to El Escorial from Madrid city center. You should take AP6 and simply wait for a”El Escorial” sign-post after Collado Villalba.

Our recommended option is to join one of the day tours to El Escorial. You can find interesting options above. They are unexpensive and you will be able to combine El Escorial with El Valle de los Caídos, Avila or  the Unesco heritage city Segovia.

The monastery was built under Philip II in thanks for his victory over the French at St. Quentin in 1557. It was dedicated to St Lawrence as the battle was won on his festival. In 1563 the commission was given to Juan Bautista de Toledo, who had worked under Michelangelo in Rome; after his death work continued under Juan de Herrera and the building was completed in 1584. The complex is built in a powerful, direct Renaissance style on a rectangular ground plan with four corner towers crowned by spires. The projecting central section of the E. façade contains the church’s apse and the royal residence.

El Escorial from the air

This is an imposing, unadorned granite front, 680 ft. long and 528 ft. wide, harmoniously articulated by pilasters. The only decorations are a statue of St.Lawrence by Juan Bautista Monegro and the Habsburg coat-of-arms. Patio de los Reyes (Courtyard of Kings): The main portal opens into this courtyard, on the other side of which stands the church. It is famous for the statues of the six Old Testament kings which grace the church façade.

The church, on the East side of the courtyard, has a Greek cross ground plan. The whole building is supported by four massive piers; there is a 295 ft. high over the four main arches. The apse, ts altarpiece, is the most highly decorated area. The tombs of Charles V and Philip II are on the left and right respectively. The classical altar and tombs are by Juan de Herrera, the bronze statues are by Pompeo and Leone Leoni, the paintings in the altarpiece are by Zuccaro and Tibaldi, and the vaulting in the sanctuary and coro was painted by Cambiaso and Giordano. The paintings which adorn the 43 side altars are by a number of Italian and Spanish artists, including Alfonso Sánchez Coello, Juan Fernández de Navarrete, Pellegrino, Tibaldi, Urbino etc.

The whole church can be viewed from the coro. The ceiling painting is by Giordano, the frescos by Cambiaso and Cincinnato; the choir stalls are by José Flecha, who based them on designs by Herrera. There is a fine crucifix by Cellini at the back.

An octagonal domed chamber with bronze and marble decorations. It was built by Crescenzi, the Italian architect. The altar has a fine gilded crucifix by Guidi and a candlestick by Master Fanelli. The bodies of most of the Spanish kings and queens since Charles I lie here. Panteón de los Infantes: Dating from the 19C, it is a burial chamber for princes and princesses who never reached the throne. The monument of Don Juan of Austria with a recumbent figure, by Ponzano, is especially interesting.

The next room is the Antesacristía (ante-room to the sacristy), a square room with vaulting frescoed by Castello and Granele; the sacristy itself is siminte  frescoed. It also contains some 42 fine paintings, including: Ribera’s ‘Descent from the Cross’, El Greco’s ‘St.Paul’ and “St.Eugene’, Titian’s ‘Christ on the Cross’ 556 San Lorenzo del Escorial and ‘Christ on the Mount of Olives, ana works by Zurbarán and others. The chapel at the end of the sacristy contains the celebrated ‘Sagrada Forma’ altarpiece by Claudio Coellļo.

Monastery and Patio de los Evangelistas (Court of the Evangelists):

This is a large cloister which formed the centre of monastery life. It was built by Juan Bautista de Toledo under Philip II, and is Renaissance in style, with Doric and Ionic columns. Juan de Herrera added fountains in the centre and there is a temple with figures of the four Evangelists by Monegro. The lower walk of the cloisters has some fine frescos of scenes from the New Testament by Tibaldi.

These are where the monks used to meet. The Pompeian-style ceiling was painted by imber of artists including Granello, Coello and Urbino. The rooms contain biblical scenes by a number of artists including Navarrete, Ribera (the Nativity of Christ), Zuccaro, Carducho and Laca Giordano. The Escalera Principal (main staircase) is by Bergamasco, and on the vault is the Battle of St.Quentin by Gior dano. There are expressive portraits of the architects Juan Bautista de foledo, Juan de Herrera and Fray Antonio de Villacastin, and of the kings from Charles I to Charles II.

One of the largest rooms houses the library, it has frescos by Peregrino, Bartolomeo Carducci, Tibaldi and Granello, and portraits include ing ‘Philip II’ by Pantoja de la Cruz, Charles II’ by Carreño, and ‘Herrera’ and “Pater Sigüenza’ (the first librarian) by

Coello. The simple lines of the wooden bookshelves are by Herrera. There are valuable collections of 10-11C manuscripts, such as ‘Songs of Alfonso X, the Wise, missals which belonged to Charles V and his wife Isabella, Philip II, Philip III and a very old manuscript of the Bible in Hebrew. There are also a number of old Moorish manuscripts.

This palace (you will note that near Madrid, and besides the Royal palace in Madrid) the kings built other palaces, including this one at El Escorial, but also La Granja and Aranjuez. This palace was commissioned by the Bourbons Charles III and IV towards the end of the 18C. It opens with the highly decorated rococo Bourbon Room’, with fine tapestries and paintings by artists such as Francisco and Ramón Bayeu, Maella, Castillo,  Velázquez and Goya (in case you may not have visited el Prado and if you enjoy your visit to El Escorial you will for sure decide to add the Prado Museum to your list). The staircase by Villanueva is especially worthy of attention. The Hall of Battles has fine frescos of battles by Granello and Fabricio Castello, e.g. the Battle of Pavia, the Siege of St.Quentin and the naval battle of Lepanto in 1571. A steeply angled staircase leads up to the Palilip II, which is furnished with as and has paintings by Titian and DAA he Throne Room has various paintings and relics.

The museum of El Escorial

The museum is housed in Philip II’s summer rooms and, since 1963, has contained a large collection of paintings. Works from the Flemish and German schools include paintings by Roger van der Weyden, Patinir, Hieronymus Bosch, Darer and David; the Italians include Titian, Tintoretto, Veronese, Bassano and Reni; and the Spanish artists include Velánquez, Ribera, Valdés Leal, Mazo, Carrefio and El Greco.

This is a small, two-store-yed shaped building situated in the middle of the park. It was built by Villanueva in classical style in 1772 by order of Charles III for his son and heir Charles IV. The ceilings are painted by Duque, Gómez, Gerroni, Maella, Lopez and others, and the interior contains some 19 rooms with paintings by Caravaggio, Luca Giordano, Ribera and Domenichino, and panels by Altdorfer, Dürer and Goya. There is an interesting Buen Retiro porcelain collection.

Silla of Philip II: The Chair

This chair,some 3 km. away from the palace, is carved out of a cliff and was the vantage point from which the king supervised the building.