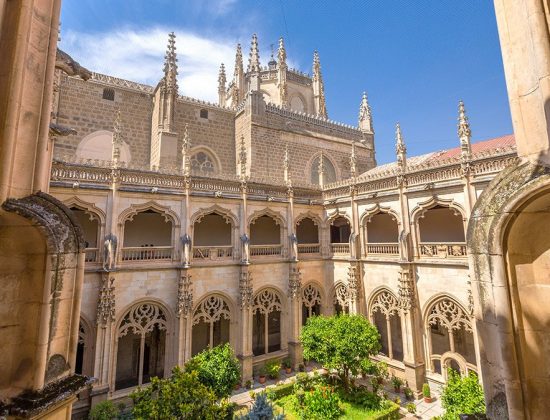 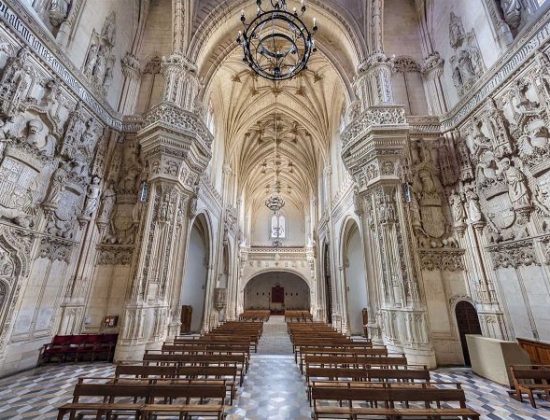 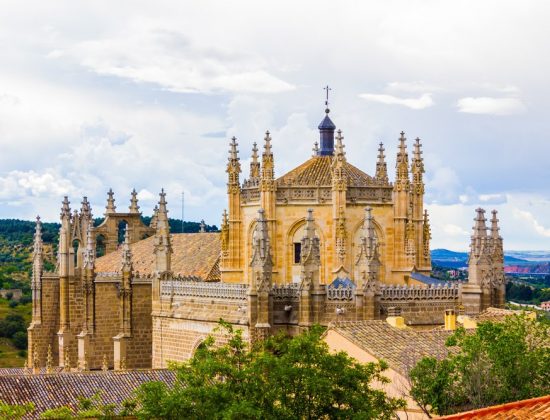 The monastery of San Juan de Los Reyes is located in the Jewish quarter in Toledo. Its elegant shape is best enjoyed from the Puerta de San Martin bridge at the other side of the Tagus river. When the visitor approaches the monastery boasts all its beauty and the splendor of the Isabelino gothic style with all its shapes and decorations is breathtaking.

This is one of our favorite places in Toledo. The cloister has interesting gargoyles.

It will take you about 1 hour to visit the church and monastery of San Juan de los Reyes in Toledo. When planning your visit to the city of Toledo San Juan de Los Reyes should be high on your priority list. It is a must-see at least from the outside.

History of the Monastery of San Juan de los Reyes

The monastery of San Juan de Los Reyes was commissioned to the architect Juan Guas by Ferdinand and Isabella, in thanks for the victory at Toro. The name was given after Isabella´s father´s name.

In the battle of Toro the troops of Isabella and Fernidand defeated the army that supported Juana la Beltraneja who was the daughter of Joan of Portugal and probably of Henry IV of Castilla. Henry was rumored to be impotent and not many people believed Juana was her daughter She was considered as heir to the throne by her uncle, Alfonso V of Portugal, and they invaded Castilla to claim the throne. But Alfonso V found fewer supporters in Castilla than he had expected and the battle of Toro was an important milestone against the hope of Juana, who however signed as Queen till she died in Lisbon in 1530.

The fact this monastery was built in just five years is simply amazing.

During the XIX century, when the French invaded Spain, San Juan de los Reyes burnt. This event signed the saddest event in the history of the museum. One of the cloisters, the altarpiece, and the library were destroyed. But that was not the only misfortune for the monastery. The monastery was expropriated to the church during one of the disentailments (desamortizaciones) that took place in Spain during the XIXth century. In 1954, however, the ownership was established for the Franciscan order, and monastic life was restored at the monastery at that moment.

Guas, the architect in charge, created one of the most beautiful examples of Spanish- Flemish Gothic architecture. The church consists of a single aisle with chapels along
the flank.

The main façade was designed by Covarrubias and it was already built following Renaissance-style principles.

The interior of this majestic church consists of eight chapels that open from the single nave of the building. The church has a Latin cross plan and the transcript is only moderately shaped. The coat of arms of the Catholic Kings can be found in different areas of the church. At the time it was commissioned the Catholic Kings thought San Juan de Los Reyes would be their royal pantheon. But this was not the case and they were finally buried in the Cathedral of Granada inside the royal chapel.

The lavish interior is of interest. The altarpiece (not the original one since it was burnt in a fire) of the high altar is by the sculptor Felipe Bigarny and the painter Francisco de Comontes.

The cloister has two floors. The pillars display 15C figures of saints. Note in particular the Mudéjar ceiling of the upper floor.

The cloister is probably the most impressive part of the building. This two-storey cloister was probably finished after the death of architect Guas, though there is no conclusive evidence to determine this. The lower part opens to the small garden and the upper part is decorated with Isabelino arches.

The visitor to San Juan de los Reyes Will for sure ask himself why chains hang in its façade. These chains represent the Christians that were freed once Granada was conquered by the Catholic Kings.

The entrance ticket visit San Juan de los Reyes can be purchased as part of the Toledo card, which is the least expensive way to enjoy four of the main tourist sights in Toledo.

Another interesting option is to hire the services of a local expert guide. This becomes really interesting for a small-sized group.

Synagogue of Santa María la Blanca in Toledo Built at the end of the 12C, it was rebuilt after a fire in the 13C. The interior of the Synagogue has five aisles, divided by horseshoe arches. The capitals are unusual, all being differently decorated with pine cones integrated into a geometrical arrangement. Around 1550 the

Transito Synagogue in Toledo Toledo is the city of 3 cultures and this top attraction, Sinagoga del Transito is good proof for this name. The Transito Synagogue also receives the name of the Synagogue of Samuel ha Leví since it was him who sponsored its construction.  The interior of the building is richly decorated. Along

Santo Tome, Conde Orgaz Burial in Toledo The church of Santo Tomas in Toledo dates from the 12C. It was rebuilt in the 14C at the behest of Gonzalo Ruiz de Toledo, Lord of Orgaz. The main chapel and the Mudéjar tower date from this time. In the Capilla de la Concepción hangs the famous