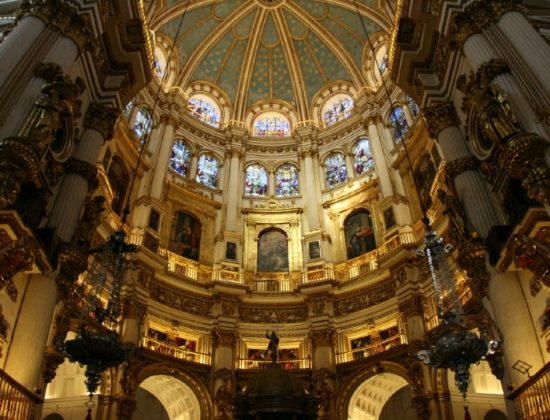 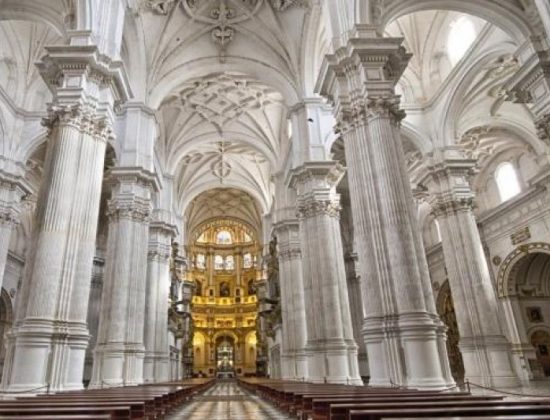 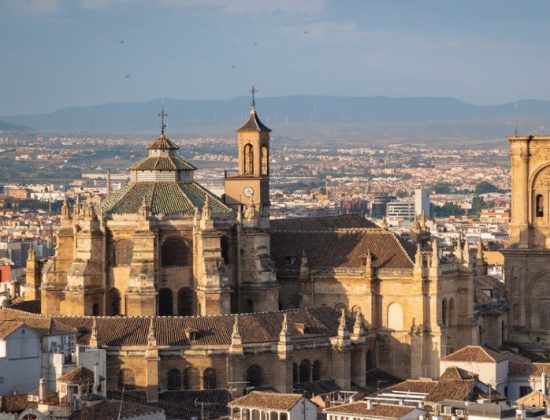 The Cathedral of Granada is one of Spain´s most remarkable cathedrals. Yet, it is not easy for any of the best tourist attractions in Granada to “live” by the shadow of the Alhambra.

The cathedral offers a fantastic combination of styles and even though it was never finished (it was meant to have 2 towers while only one of them was half-finished) But its main interest is the Royal Chapel, the place where the Catholic Kings, Ferdinand and Isabella, are buried.

The Cathedral of Granada is located at a very central point in the city of Granada at Calle Gran Vía de Colón. This is a good starting point if you plan to visit the Albaicin for example.

We would recommend you to visit both the cathedral and the royal chapel due to the importance of the chapel in the history of Spain and also due to its immense art value. Both visits together can take between 2 to 3 hours.

We include below an interesting option to visit both monuments with a very interesting price and a tour that gets overall excellent ratings.

If you will only be one day in Granada we believe both la Alhambra castle and the Albaicin should be your priority. However, if you stay enjoy a 2 day trip to Granada or longer, then the cathedral and the royal chapel are a “must-do”

History of the Cathedral of Granada

To be able to understand the history and importance of the Cathedral in Granada we have to put its development and project into the wider picture of the end of the Reconquista. In 1492 Granada was conquered by the Reyes catolicos. This marked the end of La Reconquista. At that time, two important projects were conceived. One was the construction of the palace of the Emperor in La Alhambra. The second one was the construction of the Cathedral and the Royal chapel. Queen Isabella wanted to see the cathedral built on the foundations of the ancient mosque. But this did not happen since the mosque was not considered appropriate for such endevour (this was not the case for many other churches and cathedrals in Spain like the examples of the Cathedral in Seville or the Mosque of Cordoba and Cathedral prove). The cathedral was installed at different locations and in 1506 the decision to start a new project was decided. But it took still almost twenty years to set the foundations.

Enrique de Egas started building the Granada Cathedral at that time. His idea was to create Spain´s most impressive Gothic cathedral. Today, the cathedral is massive and one of the most beautiful of all Spanish Renaissance churches, with gothic foundations and elements of baroque style. The cathedral can however be considered as unfinished.

Egas started his work in 1523 to Gothic designs. But five years later and until 1563, Diego de Siloam continued the building in Renaissance style due to his studies in Italy and his love for Renaissance style. He built the two Northern portáls: the Puerta de San Jerónimo and the Puerta del Perdón.

Siloam died in 1563 and by that time the cathedral was not finished but the essence of the building was marked and would not be much altered. The cathedral was planned as a 5 naves building rather than the most traditional 3 naves plus the main chapel. Several architects continued the project, including Juan de Mena, Juan de Orea and Ambrosio de Vico. They all three continued with the renaissance style of the building.

Yet almost 130 years after Egas had started the cathedral, the notorious architect and painter Alonso Cano took over and introduced the impressive baroque façade we admire today. Alonso Cano was the architect of the kingdom at the time of Philip IV, though he is probably best known as a painter, colleague of Velazquez and with outstanding paintings at the Prado museum in Madrid or La Real Academia de San Fernando  or the Wallace Collection in London. Alonso Cano, who was born in the region of Granada, was buried at the Cathedral of Granada.

It is the contribution of fantastic architects at different moments in history, which has made it possible to build a cathedral, originally thought of as gothic, then built as renaissance and continued as baroque, to be such a coherent piece of architecture despite the different styles involved.

How old is the Cathedral of Granada?

The foundation stone was laid under the direction of Enrique Egas in 1523 but the original project dates back to 1506. Before that time and since 1492 the cathedral had been located at two different buildings: Santa María del Realejo and San Francisco Casa Grande. The idea of building a cathedral in the city of Granada was probably in the minds of the Catholic kings well before 1492. The idea of a temple built on top of a mosque to illustrate the power of God was tempting. As we have commented already the cathedral could finally not be built on the location of the old mosque and it actually took over 30 years to start its construction after the city of Granada was conquered.

Inside the cathedral of Granada – top highlights

The interior of the cathedral of Granada is 390 feet. long and 225 feet. wide, with a nave and four aisles and mighty compound pillars. The Capilla Mayor is 158 feet high with a dome and contains much fine art. In 1929 the coro in the middle was removed and now there is an unusual through the view.

In the Capilla Mayor 12 pillars form a rotunda with a diameter of 74 feet., which opens into the ambulatory. There are 14 very beautiful 16th-century Flemish glass windows with scenes from the Passion. Other windows were made to the designs of Diego de Siloam.

Two praying figures of the Catholic Monarchs Ferdinand and Isabella by artist O Padzo de Mena 1675-77. The 12 gilded statues of the Apostles are by Alonso de Mena and Martín de Aranda (1614). Alonso Cano is responsible for the monumental busts of Adam and Eve in niches (painted by Juan Vélez de Ulloa), as well as the large paintings from the life of the Virgin Mary in the upper storey.

Vision of Christ’, and the ‘Martyrdom of St.Cecilia’, by Bocanegra. In the choir there is an 18C baroque organ. The Altar de Santiago has a statue of St. James (1640) by Alonso de Mena and the painting of the Virgen de los Perdones, which was given to Isabella the Catholic by Pope Innocent VIII in 1491.

On the left side we find the Capilla de Nuestra Señora de las Angustias has a 15th century Statue of the Virgin and a Churrigueresque altar. The treasury (the former chapter-house) has Flemish tapestries, items in gold, a silver monstrance given by Queen Isabella and two sculptures by Alonso Cano, the ‘Virgen de Belén’ and ‘St.Paul.

The Capilla de Nuestra Señora del Carmen contains ‘St.Mary the Carmelite’ by José de Mora. On the right side: there is the entrance to the Sagrario which was added in the 18C. Now a parish church, it was built on the site of an old mosque; Italian marble font (1522).

This chapel has an altar triptych by Alonso Cano. The Altar de Jesús Nazareno has paintings by Alonso Cano (St. Augustine’, ‘Virgin Mary’, ‘Christ’ and the ‘Stations of the Cross’) and by Ribera (‘Martyrdom of St. Lawrence’, ‘St. Mary Magdalene’, ‘St. Anthony’s Vision of the enfant Christ’ and “St.Anthony the Hermit’.

The royal funerary chapel was built between 1504 and 1521 in late Gothic Flamboyant style by Enrique de Egas. Work started 12 years after the capture of Granada. This means the construction of this chapel was initiated before the construction of the cathedral. Today both buildings are together. The former entrance is from the cathedral; however, the main entrance is the Plateresque portal in the later completed façade on the Plazuela de la Lonja.

The portal of the Capilla Real is a fine late Gothic work by Enrique de Egas, c. 1500. A beautiful door made by Diego de Siloam in 1534 leads into the sacristy. In the sacristy, three pieces stand out: the Assumption of Mary’, the ‘Immaculate Conception and also a wooden crucifix by Montañés.

The initials Y and F (for Isabella and Ferdinand) can be seen everywhere.

The interior is single-aisled with a splendid reja (1518) by Master Bartolomé de Jaen, which is probably the most beautiful in Spain. The gilded and painted wrought-iron grille is divided into three parts; the upper part is the most beautiful with scenes from the life of Christ and the Crucifixion. The Carrara marble tomb of the Catholic Monarchs (Isabella of Castile died in 1504, Ferdinand of Aragon in 1516) was made by the Italian craftsman Domenico Fancelli, while the tomb of Philip the Handsome and Juana ‘the Mad’, daughter of the Catholic kings, made by Bartolomé Ordóñez (commissioned in 1519 by the future King Charles V).

The high altar has excellent carvings on historical episodes (c. 1520) by Felipe de Borgoñia, including in particular paintings of the compulsory conversion of the Moors (1502) and scenes from the capture of the city of Granada. The praying figures of the Catholic Monarchs on both sides of the altar are hy Diego de Siloam. Two relicarios or side altars of 1632 in the transepts are by Alonso de Mena. Also in the left transept, there is a triptych by D. Bouts.

The sacristy: has fine paintings: Christ on the Mount of Olives’ by Botticelli, ‘Birth of Christ’ and ‘Pietà’ by Rogier van der Weyden, ‘Madonna and Child’ by D. Bouts, ‘Descent from the Cross, ‘Birth of Christ’ and “The Holy Women at the Sepulchre’, by Hans Memling as well as other paintings from the Flemish school. There are also the sword of King Ferdinand and the crown and sceptre of Queen Isabella. The crypt has the simply maintained sarcophagi of the Royal Family.

Other Cathedrals in Andalusia

Cadiz cathedral – visitor´s guide The Cadiz Cathedral is a beautiful well-proportioned baroque building with neoclassical elements. Its shape and the golden-yellow dome is an icon for the city. When the evening sun arrives the views of the cathedral from the seafront are magnificent.  Any visitor will understand easily why the cathedral is called “santa

La Giralda and cathedral – Compelete visitors guide History and styles A lot has been said and written about the Sevilla Cathedral, Santa Maria de la Sede, and the Giralda, which was minaret of the old mosque on which it was built in the XV century. This is one of Spain´s top attracions. Seville was

Great Mosque of Cordoba . A complete guide The Great Cordoba Mosque is a grandiose and fascinating part of the Muslim art, initiated by the Caliph Abderraman I, that resumes in its history the evolution of the Omeya style in Spain on top of the Gothic, Renaissance and Baroque style of the Christian construction, This