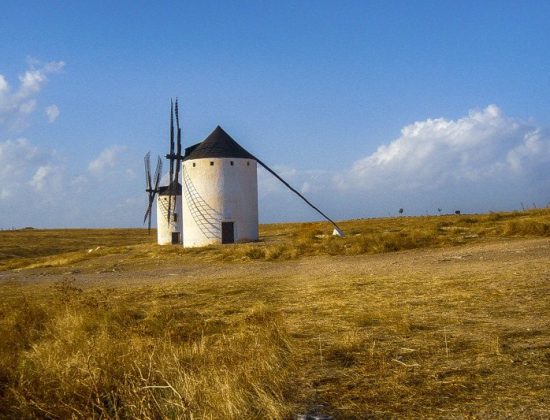 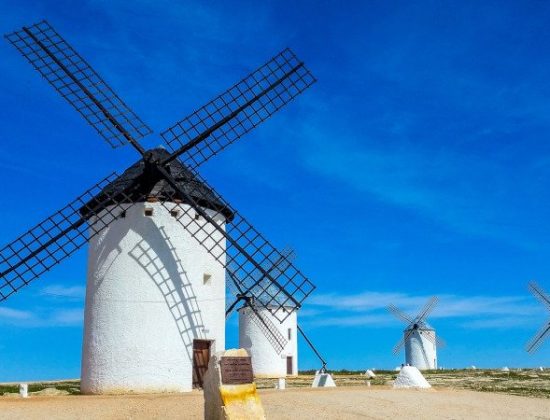 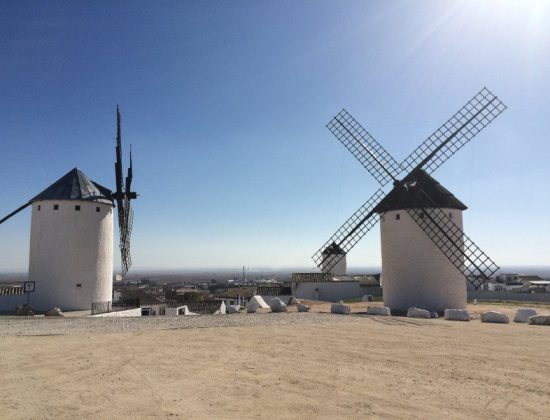 “Tilting at windmills” is an English expression taken from Miguel de Cervantes’ classic novel Don Quixote. In the book, the chivalrous, but crazy Don Quixote rides in to do battle with a group of giants who are terrorizing a local village. After he engages with the monsters he comes out of his trance and realizes he was actually fighting a windmill. The expression describes confrontations where the adversary is incorrectly perceived, or courses of action that are based on misapplied heroic, romantic, or idealistic justifications. But do the Don Quijote windmills actually exist?

The short answer is yes, the actual Don Quixote Windmills that inspired this influential piece of literature are still standing and they are located in la Mancha region, some are even still functioning and best of all, they can still be visited. There are three main areas of Spain where these iconic buildings can be experienced: 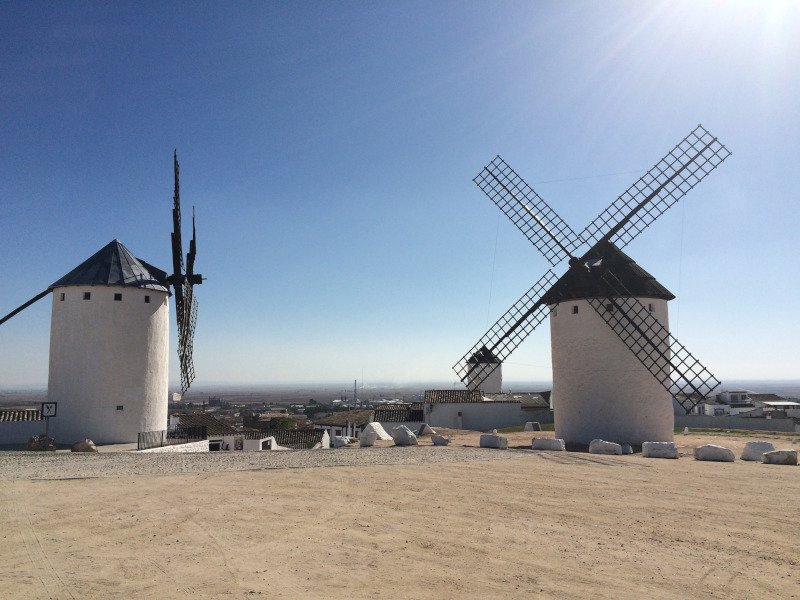 Now, it is difficult to pinpoint the exact windmills Cervantes observed as he wrote his masterpiece. Still, we know that, as we mentioned, he is referencing windmills of the region of Castilla La Mancha.

La Mancha is a relatively flat region where the wind can sweep across easily, so it is easy to understand how this bit of medieval technology became so popular.

These windmills feature 4 giant sails or blades that catch the wind and rotate what is known as the wind shaft. This shaft ie equipped with a notched brake wheel that in turn spins the drive shaft. This mechanism ultimately helps to move two giant cone-shaped stones within, that turn dried wheat into flour. That’s a lot of effort and tech just to make a loaf of bread. The Castilla la Mancha Windmills usually have several floors, and the capacity to be powered by mules if the wind isn’t blowing 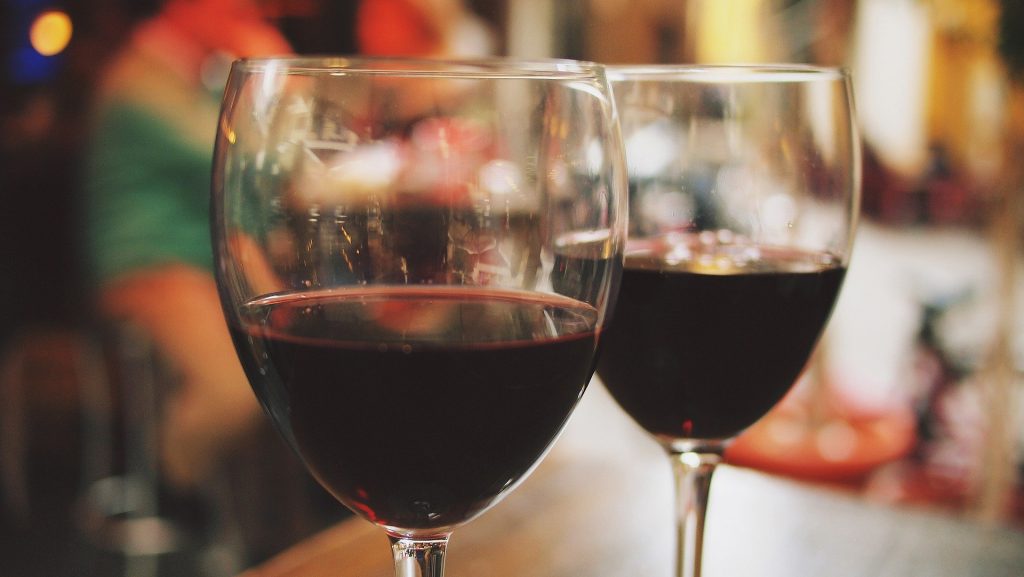 All this being said, lets jump in to the main spots in Castilla La Mancha you can visit to get up close and personal with the mythic Don Quijote Windmills:

Consuegra is located about an hour and a half drive from Madrid in the province of Toledo. Of all the windmills you can visit in Spain, these are the best preserved.

Located high on a hill outside the town of Consuegra you will find 11 of these iconic white windmills, one of which is still functioning and used for demonstrations for tourists on days with favorable weather. You will be able to go inside them and learn the history of the windmills as well as their relation to Cervantes. As an added bonus there is also a medieval castle right next to them that you can visit as well: El Castillo de la Muela.

If you are planning on visiting Toledo, make sure to set aside an hour or two to go visit this amazing landmark.

There are 10 windmills of Campo de Criptana. They are located in the province of Ciudad Real in Castilla la Mancha, about 2 hours south of Madrid. This group of windmills’ claim-to-fame is that they are the actual ten windmills that most likely inspired Cervantes while writing Don Quixote.

They were built in the XVI century. In that time, the Spanish people were familiar with the use of water-powered mills, and windmills were not used. During this time there was a terrible drought and soldiers who had returned from the Crusades and had come across this technology during their travels helped to bring this innovation to the Iberian Peninsula.

There were once up to thirty mills in Campo de Criptana that were used for milling wheat with which to make bread and they were used up until the 1950s.

Mota del Cuervo is a small village, 1 hour and 40 minutes outside of Madrid in the Province of Cuenca. Here we will find 7, extremely well-preserved windmills furnished with all the original tools and utensils.

If you are planning on visiting the charming town of Cuenca and its famous hanging houses, you should head over and check out the windmills of Mota. The town of Mota del Cuervo is also just 1 hour down the road from Aranjuez which makes for a great day trip from Madrid. There you can visit the spectacular Royal Palace of Aranjuez and the historic town that surrounds it.

Don Quijote Windmills in the Movies

Because of their role in “Don Quijote” and as one of the most iconic features in the Manchego landscape, these windmills have been featured prominently in several movies and documentaries.

They are of course featured prominently in many of the Don Quijote films that have been filmed over the years.

The world-famous Mexican actor and comedian Cantinflas filmed his more comedic take on the Quijote tale, Don Quijote cabalga de nuevo, where the Consuegra mills play the role of invading giants. The windmills also make an appearance in the smash-hit Spanish TV show, La Casa de Papel, as the backdrop in several scenes of the show.

But the most recent and infamous film to feature the windmills was “The Man Who Killed Don Quixote”. The film starring Adam Driver and Jonathan Price, directed by Terry Gilliam (director of 12 Monkeys)  took over 20 years to produce.

The film originally starred Johnny Depp and Jean Rochefort but due to a slew of production mishaps, the film was never completed. The filming process was complicated and calamitous that the footage recorded by the behind-the-scenes crew was so compelling it actually became its own documentary named “Lost in La Mancha”. the studio attempted to make the movie several other times and had names attached to the project like Robert Duvall, Ewan McGregor, Jack O’Connell, o John Hurt.

The film was finally completed and released in 2018 with the aforementioned cast. In the movie, the windmills of Consuegra once again were the chosen ones to play the role of imaginary giants.

The most famous depiction of Don Quijote, Man of La Mancha, was actually filmed entirely in Rome. Peter O’Toole plays the role of Quijote in the film and Sofia Loren is the love interest in Dulcinea. The film was based on Dale Wasserman’s broadway 1965 musical that took home 5 tony awards.

Why did Don Quixote attack a windmill?

In the book, Don Quixote, caught up in his fantasy of being a true knight, imagines that the windmills are giants attacking a village, and charges at them in an act of valor.

Where are the windmills of Don Quixote?

The best preserved windmills can be found in three different locations of this region of Spain: Consuegra, Campo de Criptana and Mota del Cuervo.

Consuegra is one hour and a half by car from Madrid, due south, and half an hour south from Toledo.

Distance from Toledo to Consuegra?

Things to do near the Don Quixote Windmills