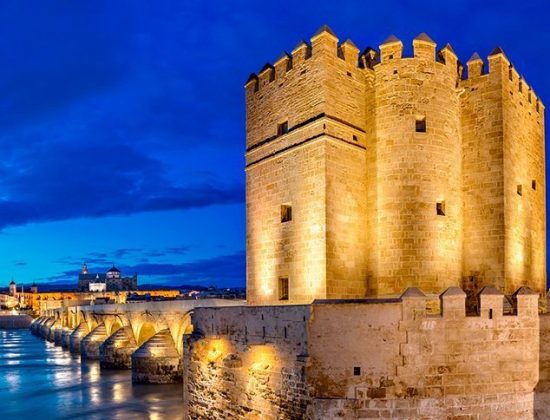 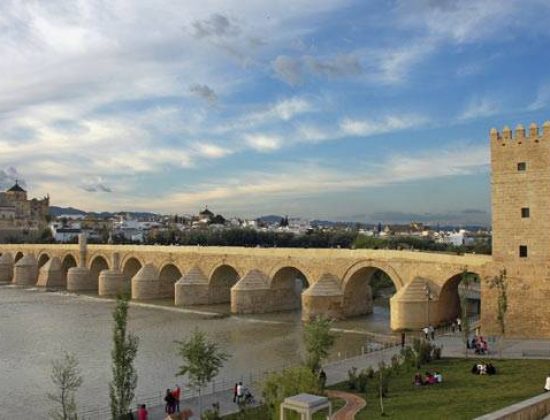 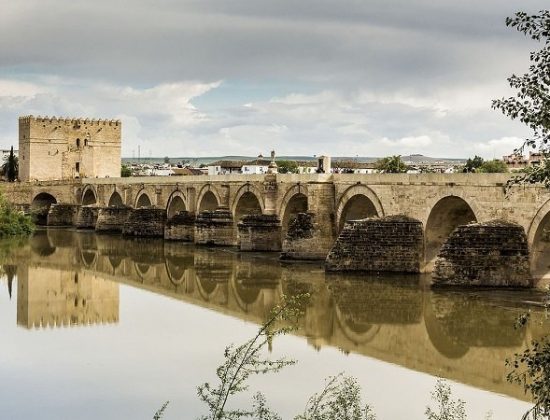 The bridge is of Roman origin. It crosses the Guadalquivir through its 800 feet long, with 16 beautiful arches. The bridge was rebuilt in Arab times. The bridge was key in the commerce and importance of Cordoba. On the South end, you will find the Torre de Calahorra, and there is no entrance fee to the bridge.

If you arrive at the bridge from the great Mosque of Cordoba you will find a 16th Century, renaissance, Triumphal arc, Puerta del Puente (the bridge´s gate). In the Guadalquivir, not far from the bridge, there are two Mills: La Albolafia (the paper mill) and the Enmedio Mill, located, as the name in Spanish indicates, in the middle of the river.

La Torre de Calahorra is a battlemented tower part. It was part of a massive defensive system (let´s remember that Cordoba was one of the richest cities in Europe). Today it hosts a museum of Al Andalusi culture, with interesting information on live-in Al Andalus and the cohabitation of Jews, Moors, and Christians. The best views of Cordoba are at dusk, but the museum is closed then.

The first mention of a tower on the southern bank of the Guadalquivir river is from 1236 after the kingdom of Castilla, under the rule of King Fernando III, finally re-conquered Córdoba.

The fortress appears again in texts the First Castilian Civil War, in which the brothers Pedro I and Enrique II of Castile fought for the Castilian throne. Enrique the II would end up winning the battle and endow the fortress with a moat and a second tower joined to the original one via a drawbridge. Castilla y Leon’s coat of arms is still visible on the exterior from this period.

Later on, a third tower would be added. All three would be joined together by two cylinders. And then, after the popularization of gunpowder among European armies, several embrasures were added to the walls to be able to fire guns.

In 1514, Juana I of Castile ordered the creation of a fortified outpost around the enclosure to improve the tower’s defenses.

The building has had several different uses over the centuries but it’s main use has been as a prison for nobles, as well as a female educational center (1863). During the Spanish Civil war, the tower was used as a barracks.

Mayor Antonio Cruz-Conde obtained the transfer of the building to the City Council in 1952 and, after a restoration process, its doors were opened on April 29, 1953, as a gallery/museum. It first displayed works belonging to the Royal Armory, the Army Museum, and the Simancas Archive.

Visit to the Living Museum of al-Andalus, Calahorra Tower

Visiting the museum will take you about 1 hour. The museum looks to immerse visitors in the culture of al-Andalus: its daily life, its customs, its science, its architecture, and its music. You will get a wireless headphone system included in the entrance fee. The headphones are available in Spanish, French, English, German, Italian and Arabic soon.

4.50 euros. Groups, children and senior citizens, 3 euros. Cordobeses (born or resident), 2 euros. Video projection: supplement of 3 euros (cannot be purchased separately. It is a complement to the visit of the Museum).

Where Is Calahorra Tower