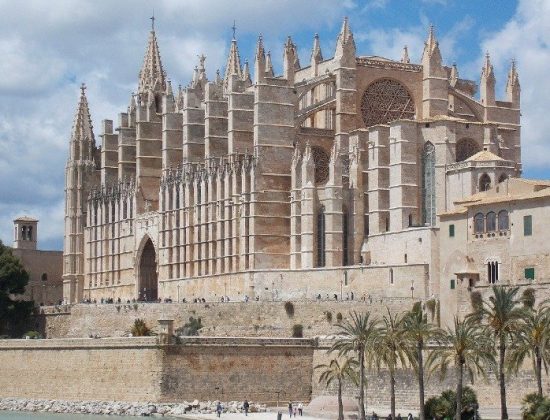 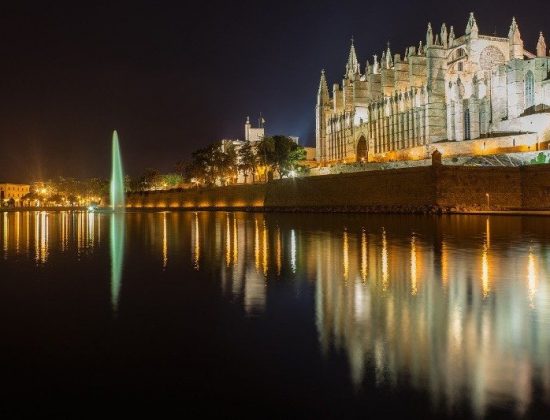 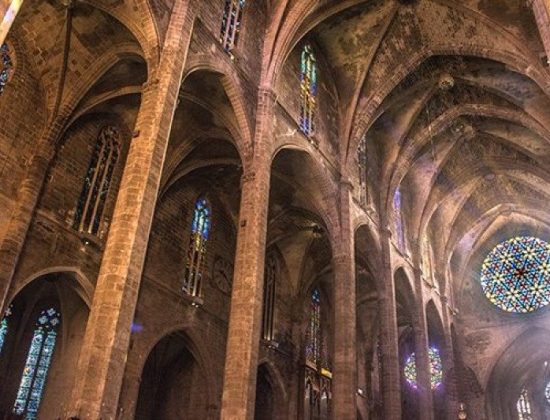 Mallorca cathedral was built between 1230 and 1600 and thus has parts which are Renaissance despite most of the building is gothic. Locals from Mallorca refer to the Cathedral as “La Seu”. La Seu is the most impressive building in the city of Palma de Mallorca and one of the best gothic cathedrals in Spain.  It keeps many anecdotes and secrets, like the intervention of Antoni Gaudi in its completion.

Tours to enjoy the Cathedral of Mallorca

History of the Cathedral of Mallorca

The history of the cathedral of Mallorca is closely linked to the reconquest of the city Mallorca by the Crown of Aragon. The idea of a Cathedral started as a promise King Jaime I did after he saved his life from a shipwreck.

As it is the case for many other Cathedrals in Spain, the Mallorca cathedral was built in the place where an ancient Mosque stood.

But ending the cathedral took centuries. This is not an exception amongst many cathedrals, but few constructions took so long as the one of the Cathedral of Mallorca. At the end of the XVI century, a first finished version of the cathedral was available, but between the XVII and XVIII century, the interior was changed. This explains the prominent use of baroque in a gothic cathedral. An earthquake in 1851 implied the reconstruction of the main façade, but this was not the end! During the beginning of the XXth century, Antoni Gaudi adapted part of the interior of the cathedral to improve its liturgical purposes. The last contribution from Miquel Barcelo is from the XXI century. He designed and deployed an enormous 300 square meter polychrome mural that is today one of the highlights of the cathedral.

How big is the Cathedral of Palma de Mallorca?

The cathedral’s proportions alone make an immediate impression on visitors.  It is 6,600 square meters, holds 87 gothic glasses and 7 rose-windows (2 of them are quite impressive and one of them is the largest of all Rose-windows in the world!)

The cathedral´s vault is among the highest in Europe at 44 meters high. This is just one meter below the Milan Cathedral.

Highlights of the Mallorca Cathedral

Inside the Cathedral. There are 16 chapels. the Capilla Real and the Capilla de la Trinidad have tombs of Mallorcan kings and most of the chapels have splendid baroque altars.  The interior is stunning and a surprise awaits the visitor: Antoni Gaudi, the master mind behind the Sagrada Familia in Barcelona, worked between 1904 and 1912 in the interior of the Cathedral, specially in the Altar, but disagreements with the local contractor ended the cooperation and his project unfinished. We are however lucky since a twisting, eccentric structure hangs from the ceiling at the front altar.

The Cathedral holds a museum (free access) with religious artwork.

Other fascinating cathedrals next to the sea in Spain

Cadiz cathedral – visitor´s guide The Cadiz Cathedral is a beautiful well-proportioned baroque building with neoclassical elements. Its shape and the golden-yellow dome is an icon for the city. When the evening sun arrives the views of the cathedral from the seafront are magnificent.  Any visitor will understand easily why

After James I of Aragon had taken Valencia in 1238, Gothic churches and monasteries were built in Valencia and all along the coast. Almost all these buildings were later altered in the baroque style and thereby frequently disfigured, This fact also applies in part to Valencia cathedral. In 1262 the

Cathedral of Málaga  Construction of the cathedral of la Encarnacion in Malaga began in 1528, following the plans of notable contemporary architects; building stopped in 1783 (late if compared to other Spanish cathedrals) . An imposing marble stairway leads up to the W. façade. Two towers-of which only the N. 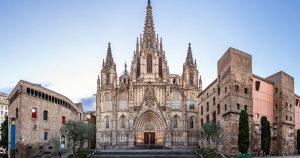 Cathedral of Saint Eulalia Barcelona’s Cathedral is dedicated to the patron saint of the city, Saint Eulalia. The beginning of the church dates back to the 5th Century. However, the impressive view of the cathedral was built in the 19th Century when the façade and other parts of the temple