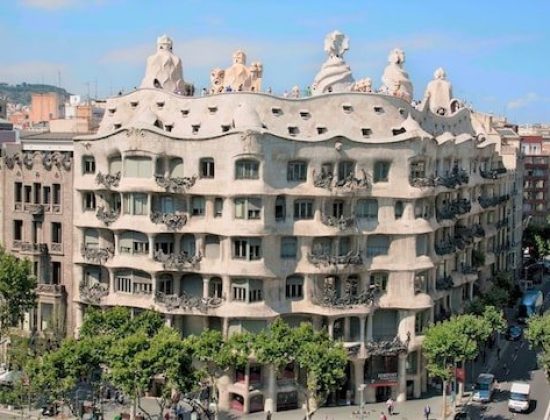 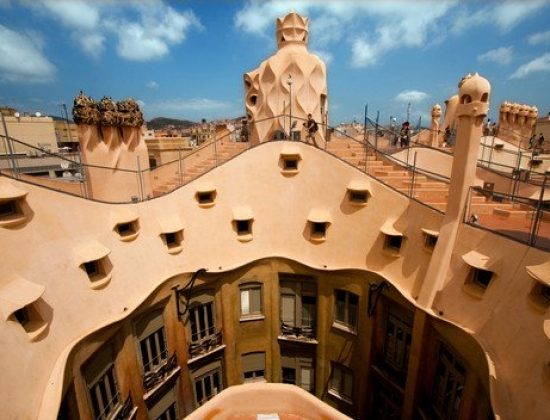 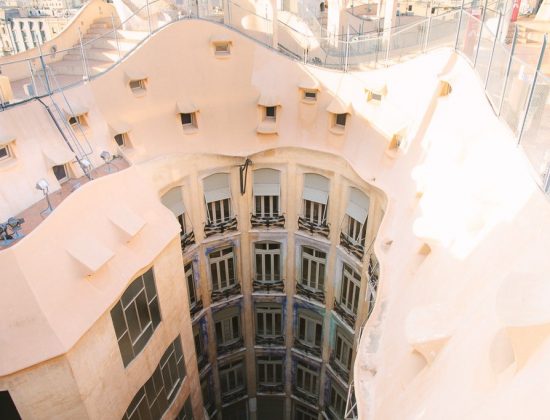 Popularly known in Barcelona as La Pedrera, is a five-storied house which received much criticism when built… but not today!

Casa Mila in Barcelona is a top attraction in the city and one of the most visited buildings in the world.

“Works of Antonio Gaudí” is the category that UNESCO has used to classify seven buildings of the architect in Barcelona as World Heritage Sites. Apart from the Sagrada Familia, many other interesting constructions are a part of this list such as Casa Milà and Casa Batlló. When it was designed by Gaudí because the building didn’t respect the conventional rules. In fact, the local government ordered the demolition of part of the building because its height exceeded the regulation. A very interesting curiosity is that Casa Milà is dedicated to the Madonna of the Rosary because the architect was a strong devotee of the Virgin Mary. With its combination of bright and light colors, feelings of excitement will be evoked during your visit inside of Casa Milà, which is structured in four different parts: the roof-terrace, Espai Gaudí, the Pedrera Apartment & courtyards, and the exhibition hall.

How long does it take to visit Casa Milá?

The visit with an audio guide lasts approximately 1 hour and a half. Audio guides are included in the price of admission to La Pedrera and are available in 10 languages: Catalan, Spanish, English, French, German, Portuguese, Italian, Russian, Chinese, and Japanese.

Skip the line tickets at Casa Milá from Gaudi

Casa Milà is located on a corner of Passeig de Gracia with Calle Provenza, previously occupied by a chalet that was on the border between the municipalities of Barcelona and Gracia.

The area was located in the heart of the Ensanche de Barcelona at a time when the Passeig de Gracia was becoming one of the main arteries of the city. This area was popular among the city’s upper class as a place to establish their residences. Because of this, the area grew rapidly and became a constructive hotbed where the best architects in Barcelona developed their work. Gaudí had built Casa Batlló shortly before (1904-1906) on the same street and had previously designed two other spaces that have now disappeared: the Gibert Pharmacy (1879) and the decoration of the Torino bar (1902) .

In this context, Gaudí was commissioned to build a manor house from Pedro Milá y Camps, a wealthy businessman whose father, Pedro Milá y Pi, had made his fortune in the textile industry. Pedro Milà was able to expand the family business and had become one of the promoters of La Monumental bullring. He also dabbled in politics and was a deputy for the Catalan Solidaritat party.

He and his wife enjoyed a privileged position, a fact that they wanted to capture in a house with innovative design and great luxury of details. They bought the plot of Passeig de Gràcia in 1905, and entrusted the project to Gaudí.

Milà’s wanted a large building, with a main floor for his own residence, and the rest of the property devoted to rental properties. The ground floor, on the outside, was used for shops. On February 2, 1906, the plans were presented at the City Hall and the building permit was requested. The construction suffered several delays. In addition, Gaudí left the project in 1909 due to differences with the Milàs regarding interior decoration.

When the relationship between Gaudí and Milà cooled, and the architect had to sue the developer to collect his fees (105,000 pesetas), which he donated to the Jesuits. To meet the payment, Mr. Milà had to mortgage the property.

After an absurd amount of fines and sanctions in December 28, 1909, the Ensanche Commission certified the building as a “monumental building” and it was not required to strictly comply with municipal ordinances.

Gaudí was very satisfied with the solution, and he asked for a copy of the resolution to keep. Finally, in 1910 the Milàs asked the City Council for permission to rent the houses in the building, but it was not granted until October 1912, when Gaudí certified the completion of the works.

During the Spanish Civil War, La Pedrera was occupied by the PSUC, the Unified Socialist Party of Catalonia. The Milàs, who were spending the summer in Blanes at the outbreak of the war, went over to the rebel side, and returned home once the war was over. Pedro Milá died in 1940, and a few years later, in 1946, his wife sold the property.

Casa Milà was declared a National Historic-Artistic Monument in 1969, and in 1984 Unesco included it within the Heritage Site of Humanity.

Where is Casa Milà

Casa Milà is located on the famous Passeig de Gracia in the center of Barcelona. It is just a few meters from the Diagonal metro station, if you are planning on getting there on public transport.

Other Gaudi landmarks in Barcelona

Q Which hotels are nearCasa Mila?

Q Which restaurants are nearCasa Mila?