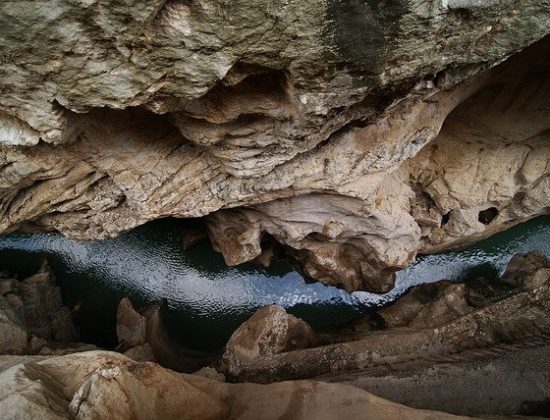 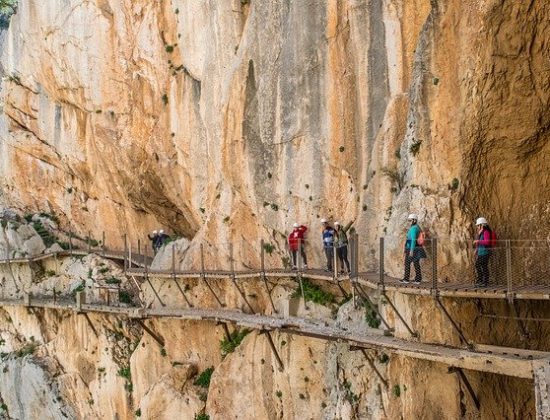 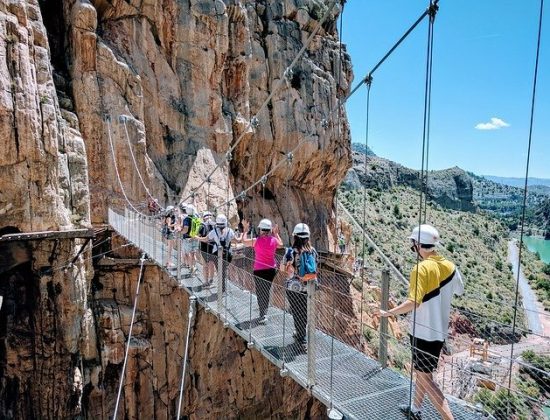 El Caminito del Rey or the King’s Path is a famous pathway through the mountains of Málaga, Andalusia, connecting Chorro Falls and Gaitanejo Falls, reserved for only the most adventurous hikers. It has become today a top tourist attractions. For decades it was considered to be the most dangerous hike in the world. Between 1999 and 2000, 5 people died attempting the trek. The walkway is just 1 meter (3 ft) wide and rises over 100 meters (330 ft) above the river below.

The narrow pathway winds around sheer cliffs and jagged rocks. For many years the pathway was rarely used and fell into disrepair. Many parts of the pathway had to be closed to the public as they were too dangerous for even expert hikers. In 2015 El Caminito del Rey fully re-opened after extensive repairs and renovations and now this spectacular and historic walkway can be enjoyed safely by all.

The walkway was originally conceived as a means for factory workers to get from the hydroelectric power plant at Chorro Falls to the plant at Gaitanejo Falls quickly and safely. This way they could easily transport materials back and forth, and maintenance inspections could be done regularly and efficiently.

Construction began in 1901 and the project took 4 years to complete, finally opening in 1905. The walkway would receive its current name in 1921 when King Alfonso XIII crossed the walkway during the inauguration of the Conde del Guadalhorce dam. and it became known by its present name.

The original pathway was built 100 meters above the river with concrete slabs that rested upon steel beams supported by stanchions built at a 45-degree angle into the rock face. It is easy to see how dangerous this could be even in pristine conditions.

As the years went on there were numerous sections where the concrete either partially or completely collapsed leaving large gaps connected only by the narrow steel beams that supported that section. If that weren’t enough, most of the original handrails were gone and the only thing you could grab on to avoid falling to your death was a thin a safety wire that ran the length of the path. Not surprisingly, several people died attempting to cross El Caminito del Rey and the walkway was closed to the public. Before the walkway re-opened in 2015, four more people died attempting to cross illegally.

In 2011 the Governments of Andalusia and Málaga agreed that they would begin restoring and updating the famous walkway. The project cost €9 million and took over 3 years to complete. The project was logistically very complex and in 2014 required the hiring of several expert alpinists to complete one of the more difficult sections of the pathway. The current pathway spans across 2,9 km of the gorge and is still not for the faint of heart. Route description and GPS track are available in Wikiloc with information, photos, and videos to help visitors.

From start to finish, El Caminito del Rey is 7.7 km, the portion that is suspended 100 meters above jagged rocks is “just” 3 km long. From the entrance of the nature park to the suspended boardwalk, there is a bit of a trek but is well worth the effort.

There are two entrances to the park: the north and the south entrance. From here to the actual boardwalk there is about a 2km walk through the forest on either side. Taking this into account, the full experience will take you about 4 hours, so make sure to bring water and snacks.

How many people died on the Camino del Rey?

At the risk of sounding morbid, no one really knows the exact number.

Since the Caminito del Rey became an adrenaline-junkie-magnet, there have been 6, highly publicized deaths.

But the pathway is over 100 years old and was built with unsafe and rudimentary tools and techniques. Builders would hang of the side of the mountain with ropes to work on the pathway back in the 1900s. It was so dangerous in fact that prisoners that had received the death penalty were recruited to work on the most dangerous segments in exchange for a reduction in their sentencing.

There aren’t exact number of people that lost their lives to the Caminito del Rey, but it is probably a lot more than 6.

Where is el Camino del Rey?

The Caminito del Rey is located in Málaga, which is a province of Andalusia in southern Spain

How to get to Camino del Rey from Ronda?

The 1960 film Scent of Mystery, also known as Holiday in Spain, the final exhilarating chase scene takes place on the Caminito del Rey where Denholm Elliott’s character and his partner, played by Peter Lorre, are chased by the Paul Lucas, who plays the villain. The chase ends with Paul Lucas’s character getting run over a train in a tunnel that is also part of the same nature park where El Caminito del Rey is located. You can learn about other movies made in Spain inour dedicated article.

El Caminito also appered in the 1965 film Von Ryan’s Express a film starring the great Frank Sinatra and in the 2012 Spanish thriller “Fin”.