The 2 fantastic Soccer stadiums in Madrid

Madrid is Spain’s largest city and capital, and is also one of the largest cities in all of Europe. Madrid is also the countries soccer capital. There are more soccer stadiums in Madrid than in any other Spanish city.  There is a permanent, heated debate across the country regarding which team is the best ever: Real Madrid or Barcelona. But, in regards to which city is the “soccer capital” there is no discussion, Madrid wins by a landslide despite FC Barcelona is a super club too! You can learn more about Barcelona stadiums in this section.

Spain is divided into Autonomous Communities in the same way the US is divided into states. Although Madrid is the largest city in the country, the autonomous community to which the city belongs (also named Madrid) is one of the smallest. But this hasn’t stopped Madrid from producing 4 teams in Spain’s top league, the  most of any other autonomous community. That is 20% of the teams that currently compete in the national league!

The 4 teams from Madrid that currently play in the Liga Santander or La Liga as its known are: Real Madrid, Atlético de Madrid, C.D. Leganés and Getafe C.F. Plus there are three other clubs that play in the Spanish second division: Rayo Vallecano, A.D. Alcorcón and C.F. Fuenlabrada.

Real Madrid and Atletico de Madrid are 2 of the world´s best soccer teams.

Stadium Santiago Bernabeu is located at the heart of the financial district in Madrid. It is even strange to find the stadium here. When it was first built this area in Madrid was basically empty. The Bernabeu stadium is one of Madrid´s most visited tourist attractions.  The  Wanda Metropolitano is Atletico del Madrid current stadium. This new, impressive stadium is located far from the Vicente Calderon stadium where Atletico played for decades.  These two scoccer stadiums in Madrid are amongst the citie´s top tourist attractions.

You can also find the location of these stadiums in our Madrid interactive touristic map  as well as restaurants and other attractions you can combine with their visit.

We also recommend you to have a look at our  Madrid city guide where you will get lots of inside information on Madrid and things to do adapted to your travel style.

The Santiago Bernabeu soccer stadium in Madrid is the home of one of the top sports teams in the world: Real Madrid. This imposing coliseum is located in the heart of the city, right on the Castellana, Madrid’s main artery. The Stadium is named after Real Madrid’s first great super star: Mr Santiago Bernabéu.

Mr. Santiago Bernabéu de Yeste was born in Albacete in 1895. He began his career as a goal keeper but transitioned to the forward position. He joined Real Madrid’s first team in 1914 (which was then named the Madrid Foot-ball Club), and he was an immediate success. He became the teams leading scorer and the perfect running mate for Real Madrid’s other super star René Petit. Bernabeu played until 1927 for Real Madrid. He retired as the Clubs highest scorer and as one of the teams toughest players. During his time as a player the team won 10 titles and he would go on to the clubs front office.

Bernabéu held the position of team director for 35 years, the longest tenure of any Real Madrid director. During his time at the Helm the team won 16 Spanish league titles, 6 Spanish cup titles and 6 European cups and becoming one of the top teams in Europe. The club also excelled in basketball during this period wining 19 Spanish league titles and 6 European cups. But, perhaps, Bernabeu’s most lasting contribution to the history of the Real Madrid Football Club was the construction of the stadium that carries his name. More information on Real Madrid here. 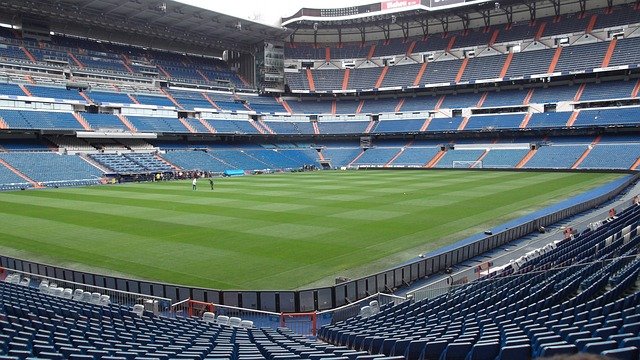 The Wanda Metropolitano is home to one of Europe’s top teams and the second best team in Madrid: Atlético de Madrid. Of course, Real Madrid and Atlético have an intense, cross-city rivalry and is considered to be Madrid “blue colar” team.

Atlético just recently moved to this ultra-modern stadium from the mythic Vicente Calderon stadium that was located in the center of town. The Wanda Metropolitano stadium is located slightly outside the city center where it enjoy easier access and parking and can offer a wider variety of events and spectacles.

The Vicente Calderón had been the teams stadium since 1966 Atlético de Madrid made the move in 2017 and hasn’t looked back.

The Wanda Metropolitano offers visits to to the stadium and the teams museum, you can even walk out onto the pitch and see the stadium as the players do. More on Atletico de Madrid here. 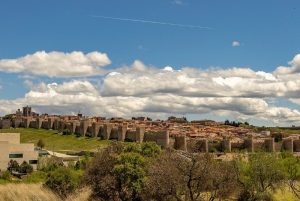