Top 5 Essential Things to do in Seville

Top 5 Things to do in Seville

Seville, the capitol of Andalucia, is a vibrant city full of amazing things to do, see, and discover. But Seville can be a challanging place to navigate, especially if it is your first time visiting the city.

Maybe you are up for an adventure and you want to experience Seville like a local, or maybe are you traveling with Family. Our local experts have put togther a series of vacation ideas to help you tailor the perfect trip for YOU.

You can also have a look at our city of Seville travel guide or at the interactive Seville map.  Enjoy planning your trip to Seville!

Top 5 Things To Do In Seville

Essential Things To Do In Seville

One day does not leave you much time, so we recommend not to be too ambitious with your planning. If we were to be just 1 day in Seville these are the things we would do!

Enjoy a Flamenco Show in Seville

It would be a shame to travel all the way to Seville, the birthplace of Flamenco, and not experience an authentic Flamenco show. Of all the things to do in Seville, this is perhaps the most essential. Few things are more emblematic of the country of Spain, and it is something everyone should experience at least once in their lifetime. Our expert local guides have selected the best of the best flamenco shows available in Seville. Check it out! 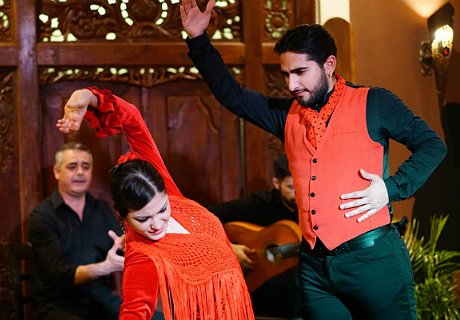 Flamenco shows in Seville – Guide to decide the best show for you This shows offers great value for money and it is a perfect way to be introduced to the passion and art of Flamenco in Spain. More than just a dance, flamenco was born as a state of mind ; a expression of deep emotions. Once you have enjoyed this show you will understand why Flamenco is regarded as an icon of andalusian and Spanish culture.

Visit La Giralda and the Cathedral of Seville

The Cathedral of Seville is the largest cathedral in the world in this style. Unesco declared it in 1987, together with the Real Alcázar and the Archivo de Indias, a World Heritage Site.

Legend has it that construction on this majestic building began in 1401, although there is no documented evidence of this. The cathedral was built upon the site that remained after the demolition of the old Aljama Mosque of Seville, whose minaret, La Giralda, and patio (patio de los Naranjos) are still preserved.

If you are up to it, climbing the Giralda and taking in the amazing views of the city from the top, is a must. 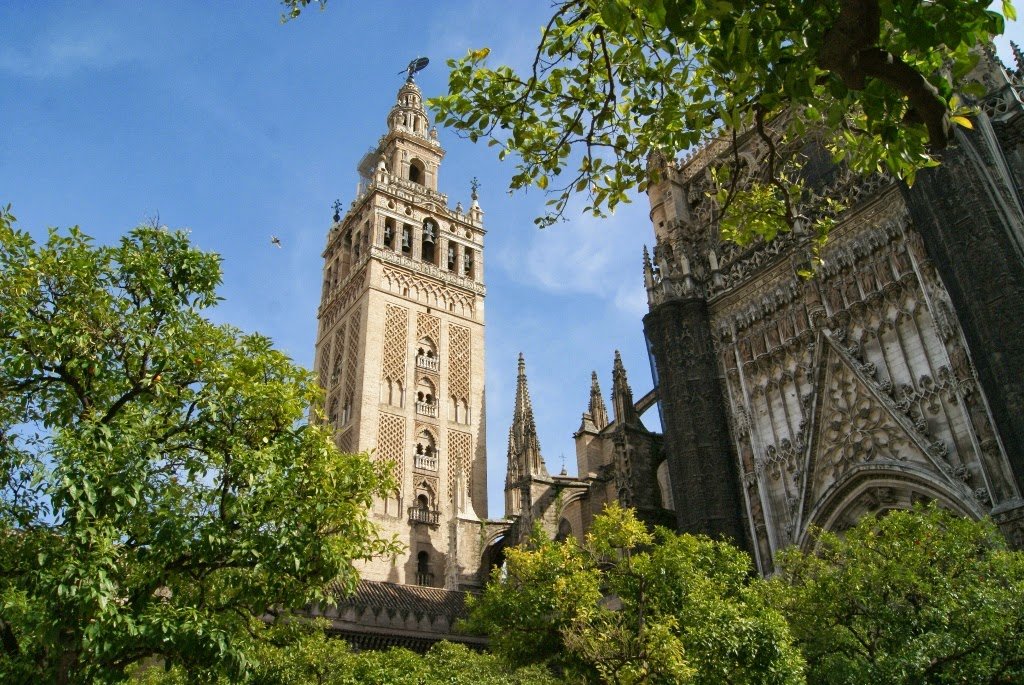 La Giralda and cathedral – Compelete visitors guide History and styles A lot has been said and written about the Sevilla Cathedral, Santa Maria de la Sede, and the Giralda, which was minaret of the old mosque on which it was built in the XV century. This is one of Spain´s top attracions. Seville was the capital of the Iberian Peninsula during the Almohad domination, it was its biggest mosque three centuries earlier. has two distinct styles, Muslim and Christian.

Discover La Giralda and the Cathedral of Seville »

This imposing and majestic tower is a 13th-century defensive tower from which a thick rote iron chain that crosses to the other bank of the river, in order to cut off enemy ships.

The tower is 36 meters high and is located on the left bank of the Guadalquivir River. It has three clearly defined sections: the first two are twelve-sided, the first erected by the Almohads while the second was built by Pedro I “El Cruel”. The third body is cylindrical and topped with a dome, which was erected in the 18th century. The tower defended the river entrance to the Puente de Barcas and, by land, the access to the Arenal. This tower was joined to the Torre de la Plata through a wall line called “coracha” which in turn was connected to the Alcázar fortress.

The Torre del Oro currently houses a small naval museum that includes two floors that can be visited and a panoramic terrace. 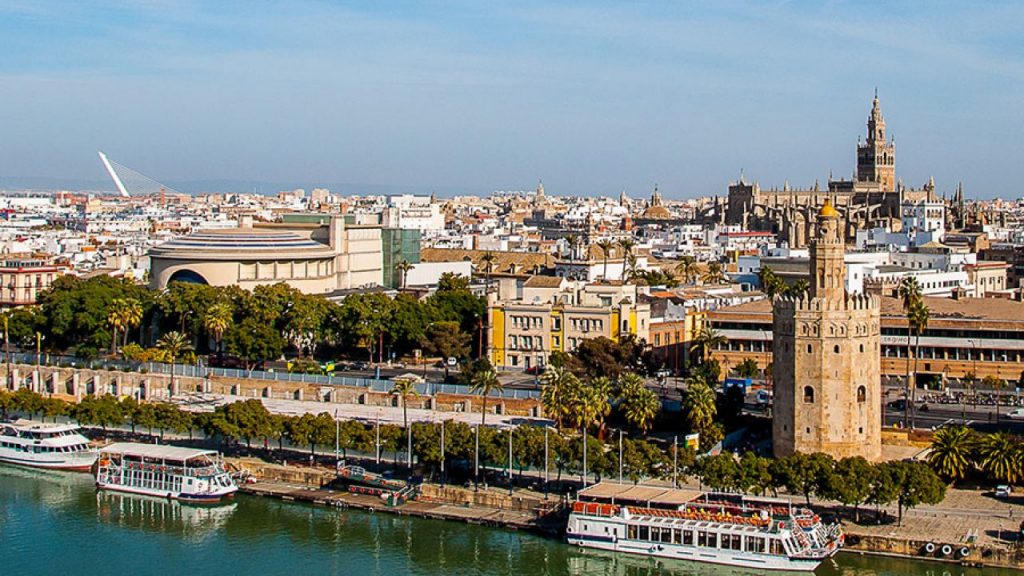 Torre del Oro, one of the icons in Seville This 12 sided fortress tower dates from 1220, the era of the almohade, and was originally part of the Alcazar. At the time it was built it was linked by a heavy chain to another tower on the other side of the river. It was reputedly decorated with gilded tiles, which accounts for its name. Later it became a prison and today it holds a small maritime museum.

The Real Alcazar of Seville is the beautiful Arab fortress that once ruled over the city of Seville. At the beginning of the 10th century the Caliph of Córdoba, Abderrahmán III an-Násir, erection of a new government precinct, the Dar al-Imara, on the southern flank of the city. The most characteristic space of power in Seville was already linked to the port of the city, the most important seat of its economic activity.

The region was reconquered in 1248 and the real Alcazar became the seat of the Crown. Pieces were added to the complex over the centuries such as the Gothic palace of Alfonso X, the Mudejar Palace of Pedro I, in the middle of the fourteenth century, etc. 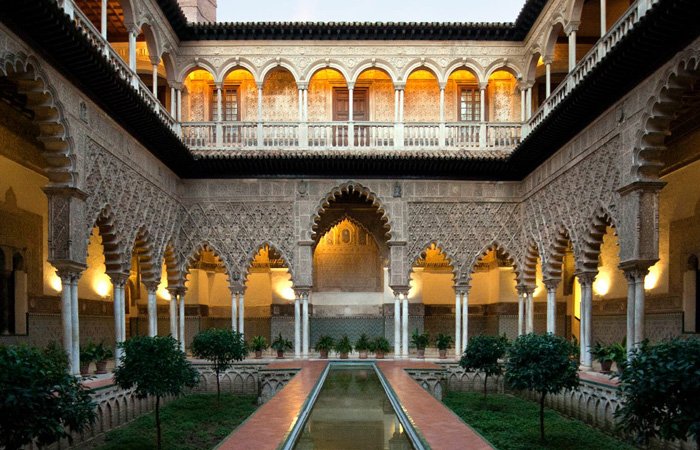 The Real Alcazar in Seville – Complete visitors guide When Europe was in its “dark” middle ages around the 13th century., Seville was an important city and as proof of this, we can enjoy today the architectural marvel of the Royal Alcazar of Seville. The Alcazar is one of the highlights of architecture in Spain and with no doubt, one of Spain´s main tourist attractions, and a must-visit during your stay in Seville. Unesco agreed a long time ago with all of this and the Alcazar was granted UNESCO heritage status to recognize its historical value.

Discover the Real Alcazar of Seville»

Located in the fomous Parque de María Luisa, this ornate square was designed by the great Sevillian architect Aníbal González. It was conceived as one of the sites of the Ibero-American Exposition of 1929. Its semi-elliptical shape is a symbol of the embrace between the ancient metropolis and its colonies.

The square occupies an astonishing 50,000 square meters, making it undoubtedly the most impressive square in Spain. A 515-meter-long canal runs along the entire perimeter of the square, which you can travel by boat.

Of the things to do in Seville, this is one of the most affordable as  the square is free to visit and has been featured in numerous films over the years.

Plaza de España in Seville Another location worth mentioning is the Plaza de Espana, built for the Ibero-American exposition in 1929 and inaugurated by king Alfonso XIII. With a semicircular shape and made of brick, marble and pottery, this monument also has a Renaissance and baroque flare in its towers. It is called Plaza de España because of its blue and white benches that represent the 48 Spanish provinces, with their corresponding maps and mosaics alluding the history of these provinces.