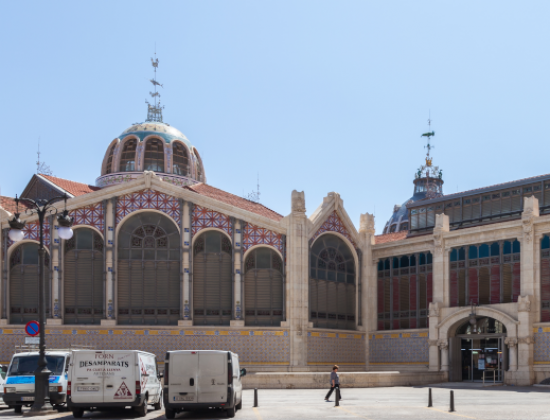 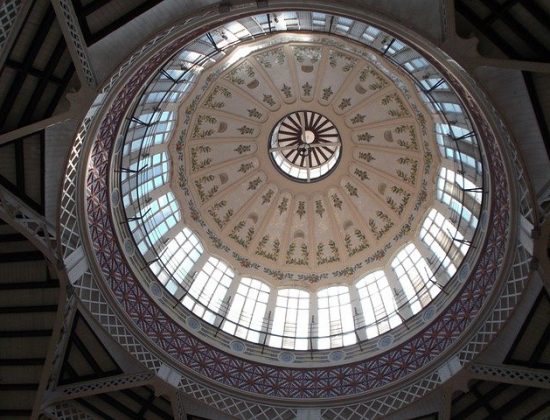 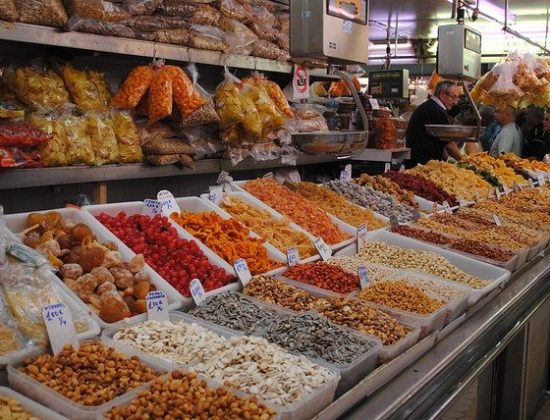 The Valencia Market or Central Market of Valencia is a public market located across from the “Lonja de la Seda” and the Church of Juanes in the heart of Valencia. It is home to a great number of stands that sell everything from fresh produce, to spices and charcuterie. The market itself is one of the most spectacular examples that you can find of Valencian Art Nouveau architecture in the City.

The Valencia Market: a brief history

The first iteration of a market we find in this area occurred in 1839. An open-air farmers market opened in the same spot, known as the Mercat Nou or new market. Towards the end of the century, the city of Valencia sponsored a contest for the construction rights for a new roofed market. In 1910 the winning design was selected. Architects Alexandre Soler March and Francesc Guàrdia Vidal, who had both studied at the Architectural School of Barcelona, were entrusted with the construction of the new indoor market. The broke ground in 1914 and the new market wasn’t fully completed until 1928. A new Valencian architect named Enrique Viedma Vidal headed up the project towards the end.

The Central Market of Valencia is one of the largest in Europe. It spans across over 8,000 square metres and features a predominantly Valencian Art Nouveau style, both inside and out. The market’s most peculiar feature is its roof that incorporated the original domes and sloping sections at different heights. The interior was built with a combination of materials including wood, ceramic, steel polychromed tiles. The size and beauty of this market make it so unique and one of Valencia’s most important landmarks. The many stands inside the market are bathed in natural light that enters through the multi-colored window panes that line the roof. This, along with the food stands and locals shopping everyday make the market a very special place. If you stay a few days in Valencia at a rented flat you may want to consider pruchasing at this superb market all the ingredients you need to prepare a perfect valencian paella. Once you haev tested your own abilities it may also be a good idea to set your bechmark against some of the best paella restaurants in Valencia.

The market also presents details taken from other architectural styles such as Valencian Gothic which is the characteristic style of the nearby Lonja de Seda and Sants Juanes church.

Apart from food stands, there are also several small restaurants and bars inside which make it a popular and trendy location for people to get together and share a drink and some tapas in Valencia.

Where is the Valencia Market?

How to tour the central market in Valencia Spain?

You can find an excellent guided tour bellow

How long to spend at central market Valencia?

It really depends if you are planning to have a drink or a bite to eat while you are there. It will take you around an hour to see everything, and if you decide to sit and have some tapas you might want to tack on another hour.