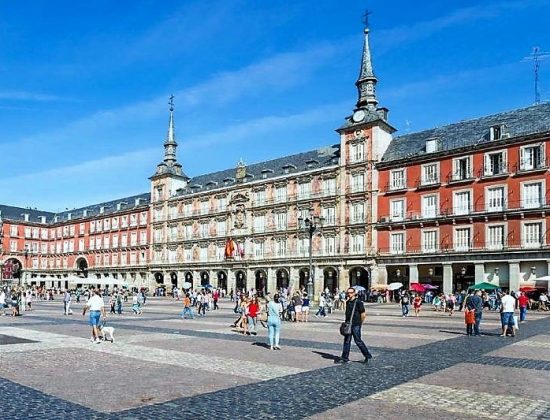 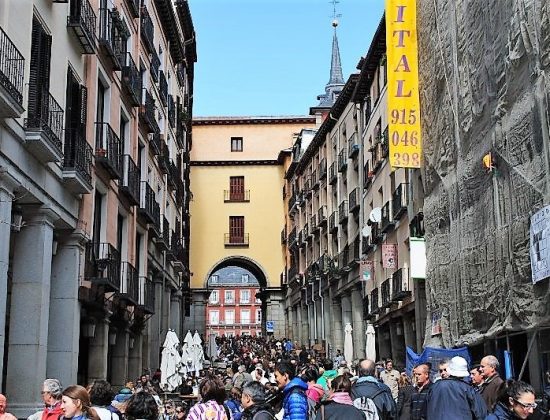 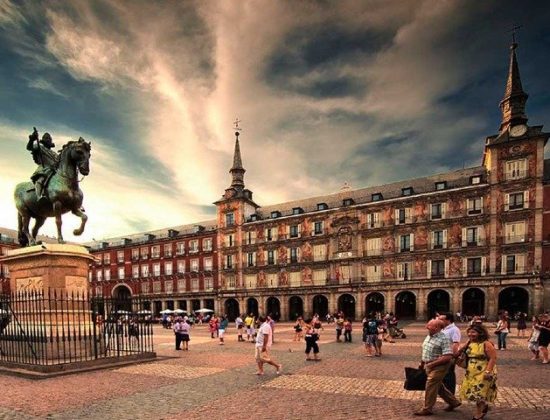 How can I get from Plaza del Sol to Plaza Mayor? This is a question heard many times in Sol, Spain´s 0-kilometer point. Well, here goes an easy answer: to get from Plaza del Sol to Plaza Mayor, you have to take Calle Mayor until you reach Calle Postas, which is the street that is filled with souvenir shops and ends in the Plaza Mayor. This arcaded plaza of 129 meters long is one of Madrid´s icons has suffered three major fires and has been restored on multiple occasions, a jewel that should not be lost in Madrid’s center.

Restaurants and tapas bars have multiplied, but there are still some shops that have persisted over decades and still have that traditional feel. The Mercado de San Miguel is very close to Plaza Mayor, and also the district of La Latina, famous for its nightlife and tapas bars.

In the past Plaza Mayor was a place of gathering for the city. This meant that everything from fairs, to bullfights to executions, were held there.

The terraces of this plaza are very popular places to have a drink but if you want something a bit more traditional, you should definitely head to one of the local bars whose specialty is the calamari sandwich (one of the most typical things to enjoy in Madrid) . You can enjoy it whilst looking at the Felipe III statue or “La Casa de la Panadería”, previously the city’s largest bakery.

Due to its beauty, but also to its strategic location amongst most to the city´s top attractions, la Plaza Mayor is part of any itinerary in Madrid. You can find ideas to build your itinerary to visit Madrid in our tourist city guide.

The area currently occupied by the Plaza Mayor was originally a swampy part of Madrid called the Lagunas de Luján.

Over time this area became a popular market and it received the name of the Plaza del Arrabal (which literally means the suburbs). At this time the Plaza was located at what was one of the entrance gates of the wall of Madrid. Merchants found it more profitable to use this plaza outside the city to ensure they avoided the fees they would otherwise need to pay to sell their goods inside the city walls. The wall of medieval Madrid continued to the west, towards the area occupied today by the street La Cava de San Miguel. This street was actually the moat next to the city walls.

At the time the Catholic Monarchs ruled over Spain, there was already regulation in place for the shops installed at the Plaza del Arrabal . But it was at the time of King Felipe III that the construction of a new plaza was commissioned with the idea to replace the chaotic plaza del Arrabal.

It only took two years to get the new square finished! The architect in charge was a disciple of the famous Juan de Herrera, the architect who led the project at the el Escorial monastery near Madrid. The new Plaza was finished in 1619. Years before that time, however, one of the most important buildings inside the Plaza, La Casa de la Panederia, was erected. This building suffered from the fire that took place in 1672. La Casa de la Panaderia is occupied today by the city of Madrid tourism office.
On the other side of the square, opposite to the Casa de la Panaderia, the Casa de la Carniceria was built. This building held the butcher´s guild and has today become a luxury hotel with amazing views of the Plaza Mayor.
Since its construction, the Plaza Mayor of Madrid became a place where all sorts of celebrations took place. The Plaza housed many festivals, including bullfighting. Up to 50,000 people would gather crowded at the Plaza (you can learn more about the evolution of bullfighting in Madrid in our guide to visit La Plaza de Ventas) The Plaza also witnessed the execution of many inmates.

The Plaza underwent large renovation works in 1853. At that time the square at Puerta del Sol was built and the Plaza Mayor became then almost a garden. Trams circulated through the Plaza at that time!
At the center of the Plaza Mayor the equestrian statue of King Felipe III was installed (it had been in the forest of La Casa de Campo).

Things to see and do in La Plaza Mayor

You will be able to enjoy the design and buildings at the Plaza. Most buildings follow a similar pattern, but Casa de la Panaderia is easily recognized by its facade painted with mythological allegories.

Another interesting thing to enjoy is the arcades and the shops and bars in the arcades. The arcades are particularly useful when it is too hot or when it rains. Under these arcades, you can still find a few traditional shops that date centuries back.

On the western side most façades maintain a characteristic style from 19th-century establishments but you should not be misled: most of them are souvenir shops as well as some bars.

A traditional store is located on number 25 of the Plaza Mayor, on the northwest side of it. There you will find the “La Favorita” Hat Store. Other traditional shops that are characteristic of the Plaza Mayor are the philately and numismatic shops dedicated to the sale of stamps and coins, some of which are still open. As a matter of fact, every Sunday, and for over 100 years, fans of philately and numismatic have gathered at La Plaza Mayor to buy and exchange.

More traditional shops can be found in the vicinity of Plaza Mayor, where you will be able to find centenary restaurants such as Casa Botín, considered the oldest in the world.

The arches at the Plaza Mayor are also one of its highlights. The most famous arch is the Arco de Cuchilleros that connects the Plaza with Toledo Street.

A typical thing to enjoy at Plaza Mayor or its surroundings is to enjoy a deep-fried, fresh calamari sandwich. Locals love to enjoy this tradition and usually accompany their sandwich with a “caña” (a beer)

Plaza Mayor from the sky 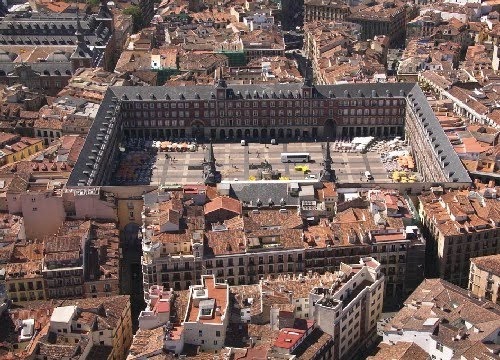 Other attractions near Plaza Mayor

Located at the heart of Madrid, La Plaza Mayor is a few minute’s walk from some of the city´s top sights. 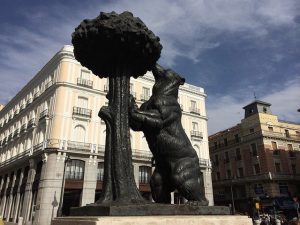 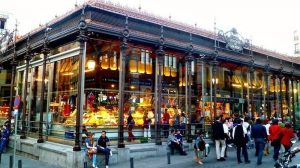 The Mercado de San Miguel Designed by the architect Alfonso Dube y Diez, the Mercado de San Miguel was inaugurated on the 31st of May 1916 but now totally re-done by Juan Manuel Alarcon. This market has all types of food from the land and the sea, and you can enjoy eating it in the magical interior with metal, crystal and ceramic frames. It is beautiful, but many locals believe it has become too touristic and 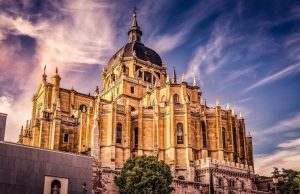 The Almudena, Madrid´s  Cathedral Due to the way in which it was built, the cathedral of Madrid, the Cathedral of La Almudena has received critics. Some claim it has no real style. This can be well true, but its dimensions and some of the things we find inside it make it with no doubt one of the top attractions in Madrid! Unlike most cathedrals, the orientation of the Almudena is North-South (instead of East-West). The 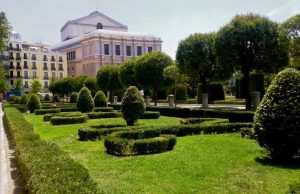 Q What to do near Plaza Mayor de Madrid

Q Where to stay near Plaza Mayor de Madrid