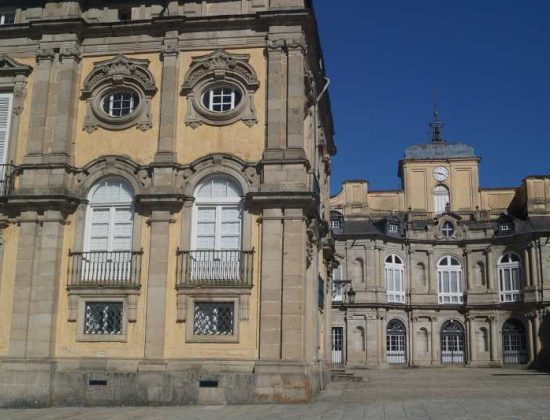 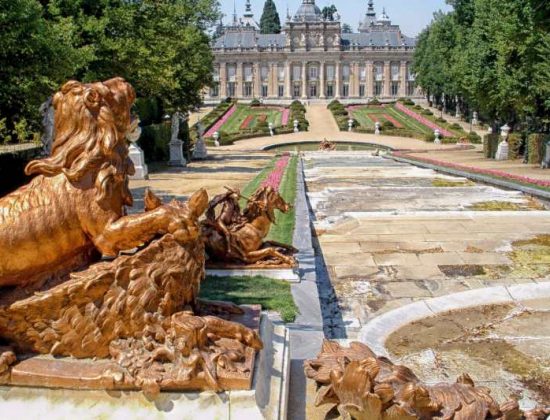 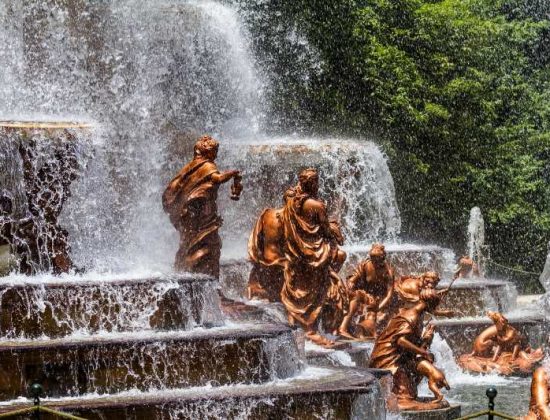 Palace and gardesn> The Spanish version of Versailles

The beautiful grounds are perhaps the most attractive feature of La Granja. They were designed in classical French style along the lines of Le Notre’s gardens at Versailles and cover a
notal area of some 360 acres surrounded by a fence nearly 4 miles long. The paths and squares were finished in 1723, at a total length of 22 miles; the elm and wild chest nut trees were planted in the same year. The garden was planned by René Carlier, whose task was helped by Marchand’s preparation of the soil and construction of channels. After Carlier’s death, Esteban Boutelou took over; he had been the resi-
dent garden designer at Aranjuez since 1716. The gardens have 26 enormous fountains, as well as numerous smaller ones,and there are sculptures everywhere,
mostly of animals and children. El Mar,the lake which supplies the water to the fountains, is artificial, and lies on a 4,000 ft plateau in the centre of the park. The following fountains are of particular interest: the Gran Cascada (great cascade), by Thierry and Fremin, in front of the castle’s main façade has twelve basins which
form an allegorical image of the Earth and the four seasons; the group of three symbolizes the Tres Gracias (three Graces); the Carrera de Caballos (horse race) is a mix-
ture of fountains and basins, which form a cascade; Los Caracoles (the snails); El
Abanico (the fan); the huge basin of theFountain of Neptune; the titanic Fountain
of Apollo; and the group depicting Andromeda being freed by Perseus, set amidst
enormous fountains, by Thierry and Fremin. Las Ocho Calles (the eight paths) con-
sists of eight fountains grouped round a paved circular area, with a statue of Pan-
dora and Merkur in the centre and eight more statues around the outside, all by Fre-
min. Other interesting fountains include La Fama, with a jet height of 155 ft., Los
Baños de Diana, Latona, El Canastillo and Las Ranas. Palace

La Granja is a monumental building with four parallel wings, in the middle of which the old monks’ guest-house
survives. Ardemáns began the work in 1721. The main façade, 509 ft. long and
43 ft. high, was completed by Sachetti in 1736 to the designs of Juvarra. It has a fine
portal with the four seasons in the form of caryatids. The side façades are 148 ft. long
and the two inner courtyards, the Patio de los Coches and the Patio de la Herradura,
were added later by Andrea Procaccini and Sempronio Subisati; the rear façade.
closes the church. The interior, in spite rearrangement and damage sustained
fires, still has well-furnished rooms with many interesting and valuable pieces. The
on the ground floor, the Sculpture Gallery following rooms are the most interesting
whose ceiling is decorated with mytholical themes by Bartolomé Ruscha; t
Mae Room, with splendid marble pilland columns and a decorated ceiling,
State Gallery on the first floor, which sists of a number of rooms with eleg
marble floors, Empire furniture and site painted ceilings by Sanni, Saxo
Fideli; the Throne Room, with an As sion; the Japanese Room, beautifully
nished and containing four paintings in Biblical themes by Juan Pablo Pan
Other rooms contain 18&19C paintings, including some with folk themes by Hou-
asse, and portraits of Philip V and Isabel de Borbón by van Loo, also Biblical and
allegorical works by Lucas Jordán. The collection of Flemish and Spanish tapestries
from the 16C onwards, deserves special at rention.

Laid out as a Latin cross, it has shigh dome over the transept and a façade
with two towers. The interior contains a number of fine works of art: Immaculata
by Maella (1774), Imposición de la Casulla San Ildefonso (Presentation of the Chasuble) by Bayeu and a processional cross by
Antonio de Oquendo. The dome and Faulting were covered with frescos, but these have since been destroyed by fire.
The finest piece in the church is the tomb of Philip V and his wife, which was com-
pleted in 1756. It is made of marble, and busts of the royal couple in medallions.
t was built by Sempronio Subisati and Pedro Sermini, with the sculptors
Dumandré and Pitué. Opposite the tombs an 18C stucco relief by Salvador Car-
nona of the Victory of Christ.