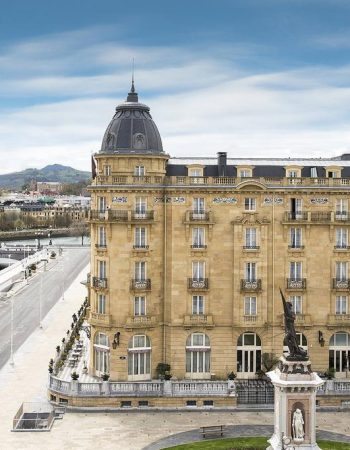 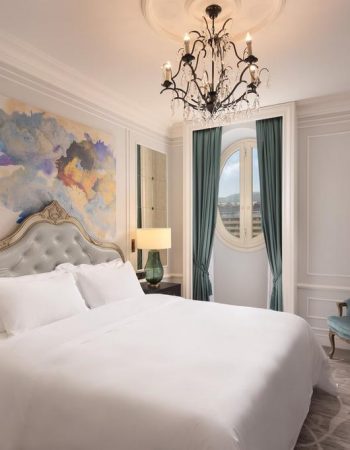 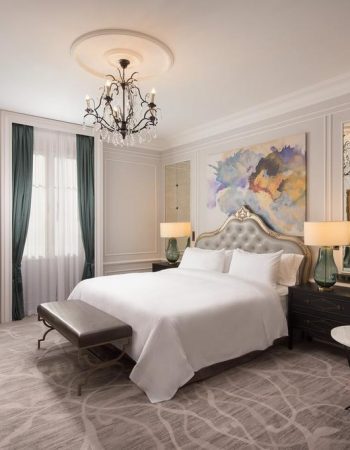 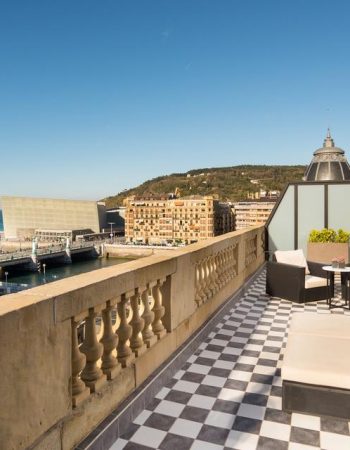 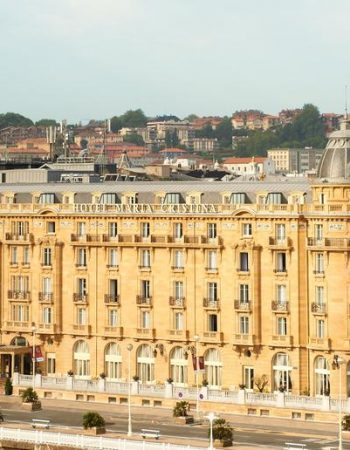 The María Cristina Hotel has been in operation since 1912 and offers some of the elegnat and comfortable lodgings you will find in San Sebastián.

Maria Cristina, a Luxury Collection is a 5-star hotel is located in the heart of San Sebastian, right in front of the Victoria Eugenia theater, and enjoys spectacular views of the Cantabrian sea and the Urumea River.

This Hotel has been in operation since 1912 and offers some of the elegant and comfortable lodgings you will find in San Sebastián.
The rooms are equipped with air conditioning, flat-screen satellite TV, and private marble bathrooms with bath and rain shower, robes, and slippers.
Every morning the hotel serves a buffet-style breakfast. The hotel bar, the DRY Martini, offers pinchos and a great variety of drinks to enjoy.
The Maria Cristina has welcomed an array of movie stars, from Woody Allen to Elisabeth Taylor that came to stay in San Sebastian during the Film Festival in September. The Festival takes place at the Kursaal convention center is located 350 meters from the Hotel and the historical city center just 450.

The city of San Sebastián started to become a popular tourist destination in Europe at the beginning of the 20th century. This sudden influx of tourists and money lead to the architectural development of the city. The new construction followed a rationalist style which left city with a clear French-style style with all the amenities of a modern 20th-century metropolis. In fact, the San Sebastián Development Society was created in 1902, a private organization whose main objective was to provide the city with a large luxury hotel and theater.

There were several different locations considered for this project, but it was finally decided that the complex would be constructed in the Zurriola gardens, a large urban park on the edge of the mouth of the Urumea river. The San Sebastián City Council granted said space on the condition that both the hotel and the theater became municipal property after a period of 70 years from their opening.

Construction on both buildings started simultaneously in 1909. The theater was conceptualized by the architect Francisco de Urcola. Its design was inspired by other contemporary theaters in Europe. The hotel, on the other hand, was designed by French architect Charles Mewes, who is also responsible for Ritz hotels in Europe, such as those in Madrid and Paris, and Urcola led the project.

It wasn’t until 1912 when both the theater and the hotel would open their doors. The Victoria Eugenia Theater and the María Cristina Hotel were inaugurated with Queen María Cristina of Spain in attendance. The Theater and the Hotel became the architectural crown jewels of the city and have remained as such ever since. Its heyday coincided with the belle époque of San Sebastian, that is, with the period of the First World War, during which San Sebastián would become the European meeting place for the well-to-do classes.

The Maria Cristina Hotel gained even more fame in more recent years after the creation of San Sebastián International Film Festival. The stars in attendance at the festival, traditionally stay at the Hotel every year because of its opulence and the proximity of the Victoria Eugenia Theater. This physical proximity to the theater made it possible for the stars to pass from one to another on a red carpet that would become one of the distinctive elements of the Festival at an international level.

The hotel is located in the heart of the city, overlooking the beautiful Urumea River next to the beautiful Plaza De Okendo and within walking distance from many bars, restaurants, and shops. In addition, most of San Sebastián’s top attractions and historic sites are within walking distance, including the spectacular La Concha beach, the family-friendly San Sebastián Aquarium, the Basilica of Santa María del Coro, and Urgull. The train station is a nine-minute walk (or six minutes by car), while San Sebastián Airport is 30 minutes by car.

The hotel features beautiful and unique Belle Epoque decor throughout the hotel and sleek and elegant rooms.

The rooms are enveloped in soft muted tones with splashes of color in the form of abstract artwork adorning the walls. Its modern feel contrasts with details that date back to another era, such as chandeliers, crown molding, and beautiful headboards.

The rooms are also furnished with all sorts of elegant details including elegant desks and velvet seating, and some of the higher-end rooms add romantic pieces like four-poster beds.

Large windows let in plenty of natural light and overlook the gardens or the river. The suites offer more space and have elegant living rooms with sofas, velvet armchairs and original decorative fireplaces. Terrace Suites have private furnished terraces.

All rooms are equipped with flat-screen TVs, minibars with bottles of champagne, electronic safes, and free Wi-Fi, but no coffee and tea facilities. Family Rooms add extras like toys and activity books for the kids.

The luxurious marble bathrooms have separate bathtubs and showers. Plush robes and slippers, Elemis toiletries (Loewe bath products in some upgraded suites), and hairdryers are provided

Services at this hotel

Top things to do near Hotel María Cristina 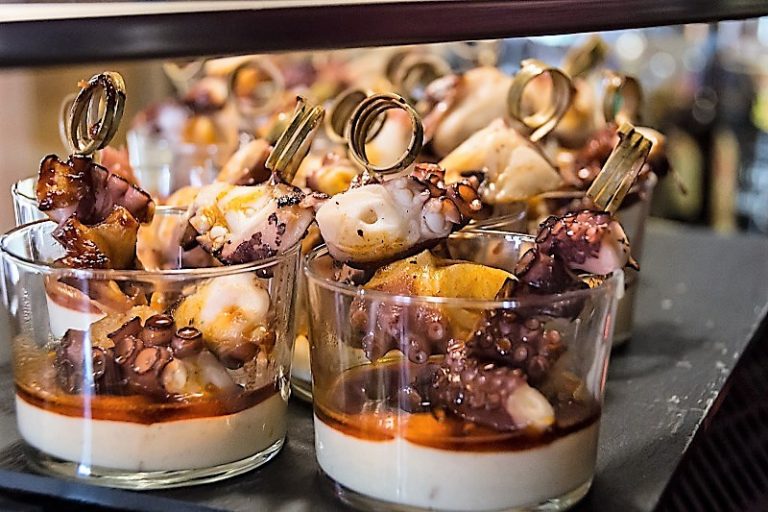 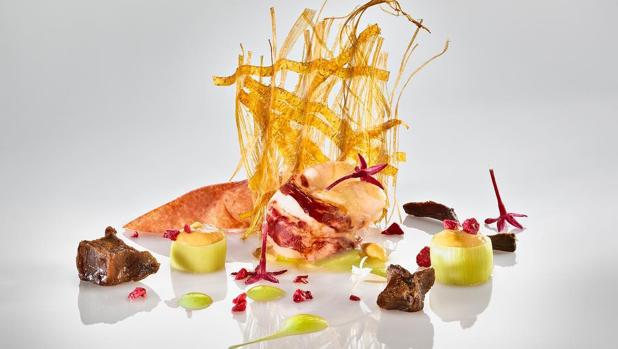 Other quality hotels in San Sebastian 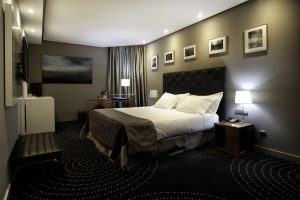 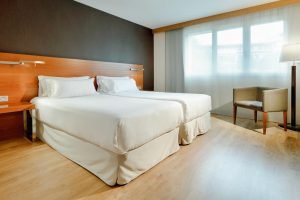 Why we recommend hotel Hesperia Donosti? The modern Hesperia Donosti is located in he Ondarreta district of San Sebastián, 4 minutes by car from La Concha beach. All of the rooms at the hotel are equipped with air conditioning, free wifi, flat-screen satellite TV, a pillow menu, and a private 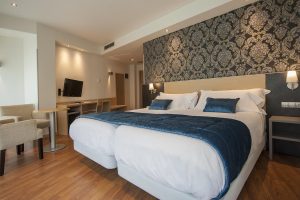 Why we recommend hotel Sercotel Codina? The hotel is located just 250 meters from the Ondarreta beach. All rooms are equipped with air conditioning, free WIFI, flat-screen satellite TV, a private bathroom and a minibar. Some rooms also feature a private terrace. The hotel also features a TV lounge room 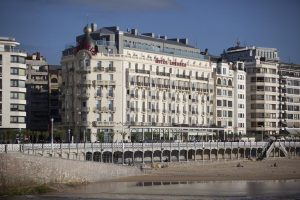 Q What to do in San Sebastián near Hotel Maria Cristina

Q What is the check-in and check-out time at hotelMaria Cristina, a Luxury Collection Hotel, San Sebastian

Q Where to eat near Hotel Maria Cristina

Q Other places to stay near Hotel Maria Cristina