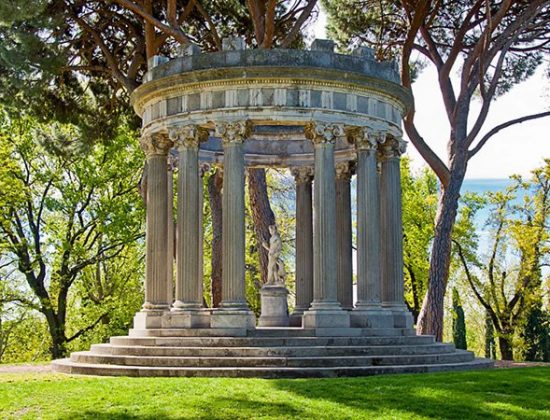 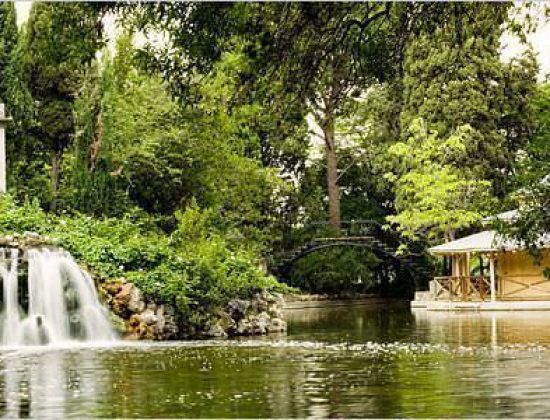 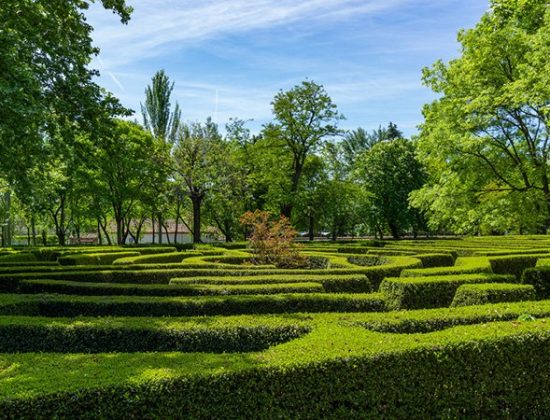 El Capricho is probably Madrid´s most beautiful and romantic park and despite it is not very well-known, we believe it is one of the important attractions in Madrid. The park boasts rich botanical treasures, but it is not limited to this since there are also fountains and sculptures. Amongst the park top highlights: a pond, a mansion, a labyrinth and a bunker!

El Capricho is not a huge park. Its 17 hectares compared to the 118 hectares of the Retiro park in the heart of Madrid, or the 160 hectares of El Capricho´s neighbor park, the modern Juan Carlos I park.

The Capricho park is located on the very east of Madrid’s city,  in the Alameda de Osuna neighborhood (a district located near the Barajas airport)

Entrance to the par is Free of charge but there are only one entrance and control in place to ensure no animals enter the park, that no food is entered (this is not a park to enjoy a picnic), and that no more than 1,000 people visit the park at the same time.

Things to bear in mind: As already mentioned, animals, even if carried on a leash, are not allowed. No ball games are permitted, and neither bicycles nor skates can get inside the park.

The park is not opened every day but you can access it practically every weekend throughout the year.

History of the park

The park was built in 1784 and request by the Dukes of Osuna (the Alameda de Osuna distric gets its name from this Ducado) Don Pedro de Alcántara Téllez de Girón, ninth Duke of Osuna, bought this land from the Count of Priego. At that time, the land contained a farmhouse and an orchard. The duke expanded the estate with the acquisition of adjoining land. He ordered the planting of trees and it 1787 he requested famous architects Machuca and Medina to build a quadrangular palace with towers at the ends.

The park came to be known as El Capricho in honor of the Duchess of Osuna. It was she who put the most interest in its transformation into a recreational park. El Capricho means caprice or whim in English and the name makes justice to what we find today. This is not just a park, but a monumental park with lots of surprises inside. During the 18th century, the park received the visit of many artists, thinkers, and bullfighters Writer Leandro Fernández de Moratín and the very famous painter Francisco de Goya were frequent visitors. Goya himself painted the masterpiece, The Spell to decorate the Capricho Palace. The Spell can be seen today at the Lázaro Galdiano Museum, one of the top art galleries in Madrid.

The Duchess was the soul of the park and her ideas and inspiration are felt in the park. But after her death the park was neglected. of the Duchess, the park slowly fell into neglect and disrepair until 1974 when Madrid City Council acquired it restored it to its former glory. The works were finished in 1999 and the park was reopened to the public.

This park was made, almost entirely by an illustrious gardener named Paul Boutelou commissioned by the Duchess Doña María Josefa in the late XIX century. This park is with no doubt one of the most romantic things to enjoy in Madrid.

English, French and Italian styles combine, as a reflection of the artistic influences of the park’s designers. El Capricho is the only truly Romantic garden in Madrid (if we consider its design and architecture) The labyrinth of bushes, the palace, the small hermitage, or the beautiful ballroom, as well as the streams that run through it and its small pond, where swans and ducks please the children. Lilacs are very present in the park: the duchess had thousands of specimens planted since they were her favorite flowers.
The park was used as a base for the French troops during the French occupation, and it was also used for military purposes at the time of the Spanish civil war. In 1974 the city of Madrid bought the park and in 1984 it was declared a cultural monument. Today many madrileños do not know of the existence of this fantastic “hidden gem” of Madrid

Top highlights of the park

There are three different gardens with clearly different inspirations. The French Garden is located facing the palace. This is the area where you will find the labyrinth and many hedges

The Italian garden is located in the southern part of El Capricho and it is an area where different types of trees provide shades and a pleasant atmosphere to avoid the sun of Madrid during summer.

The most romantic spot of the garden is the area where we find the old greenhouse, a Renaissance fountain, and a small bridge above a small stream. It is common to find brides in their beautiful dresses taking photos for their wedding album!

Another interesting part of the park is the Parterre of the Duelists. This is located at the Plaza de Los Cipreses, a square surrounded by trees that has two spectacular columns in its center. Each of these columns holds a bush. Since they are located 40 steps apart, it was thought that the inspiration for this monument was an actual duel.

In the upper part of the park, you can find a beautiful lake and its pier known as the Casa de la Canas (House of Reed) because of the material its built out of.

The bunker is another gem of El Capricho. As already mentioned, the park served as the headquarters of the Republican Army. A bunker was built. The construction occupies 2,000 square meters and lies 15 meters underground. It could protect soldiers of the bombing of up to 100 kilograms. Since the park has huge trees, it served very well the purpose to hide the military buildings. The bunker has seven rooms and four exists, one of them across the basement of the Palace.

A small hermitage is one of the many attractions of the park. The legend describes an old ermit who lived here and who was buried in a tomb with the shape of a pyramid next to the hermitage.

There are many other secrets places and surprises in the park. If you find a bit of time during your trip to Madrid, we strongly recommend you to pay it a visit!

Q Where to stay near El Capricho Park

Q What to do near El Capricho Park